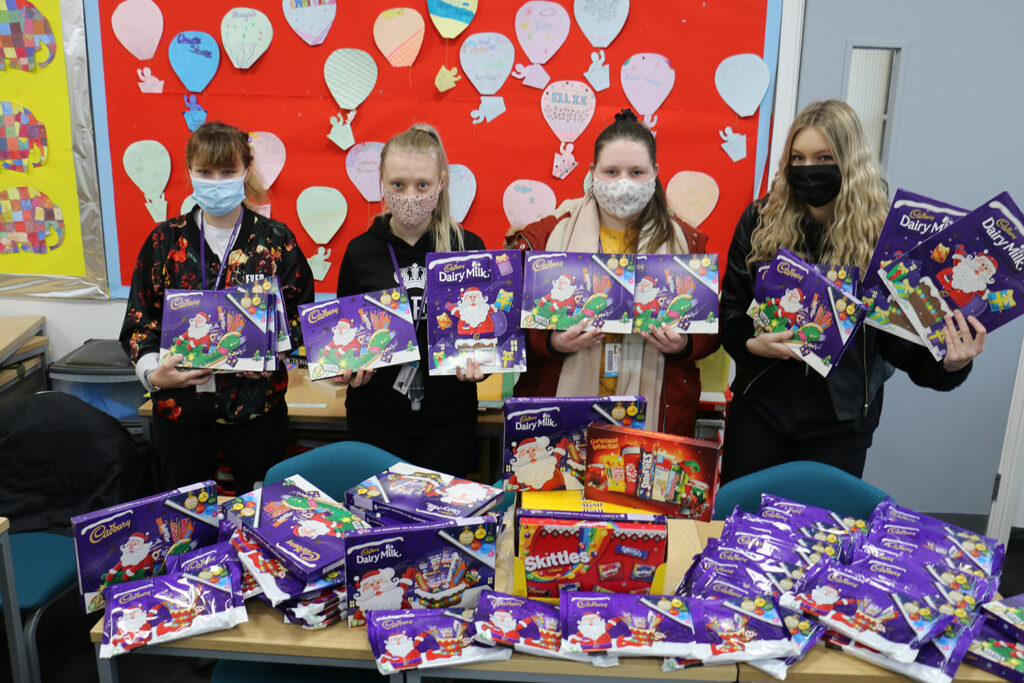 A deluge of warmth and kindness for local communities has poured out from staff and students at West Nottinghamshire College this festive season.
That’s because Christmas hampers of food, clothing, toys and toiletries have been gathered ready for distributing amongst some of the area’s charity groups and food banks. 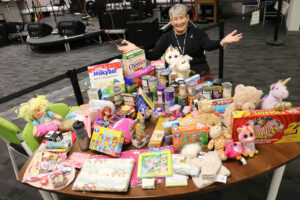 The Schools Out project received a double helping of charity through two initiatives at the college. Level 3 Childcare students collected over 100 confectionary selection boxes to give to children who are less fortunate.
Eleanor O’Hara is the group’s enrichment and learning company coach. She said: “We’ve had a great response to this cause. My class have worked hard on this initiative, putting up posters and raising awareness with the other childcare groups. Many vulnerable children, who don’t have as much, will be so happy to receive a little gift such as this.”
School’s Out was established in 2019 and was originally set up to provide school uniforms to deprived families in the Mansfield area. However, it was discovered through the schools and liaison officers that there was a much greater need for children to receive meals. And during the pandemic more and more families have needed to use the service for food parcels.
Bernie Tyers, who is an ALS support worker at the college, also volunteers for Schools Out. She organised the second collection at the college which saw staff donate many toys, food and drink which filled the boot of her car!
Bernie said: “We’ve concentrated on collecting toys and food for the children. It’s been a difficult year for people going through losing jobs or having limited funds through furlough, so we decided to collect these items at college.
“Mansfield Building Society, who have donated £6,000 to the project, will now help to put food parcels together for local families and toy gifts for the children and get these out for Christmas.”
Student liaison officers Josh Levy and Callan Kemp joined in with the Festive FE Foodbank, launched by London South East Colleges. This project aims to encourage UK colleges to gather food parcels for local communities that may be struggling due to the pandemic. 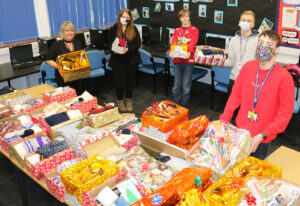 Boxes of toiletries and food items were presented to Liz Thomas, co-ordinator at the Sherwood Forest Food Bank, based at Mansfield Woodhouse’s Stable Centre, which were collected by students over the last two weeks.
Liz said: “This is wonderful to receive help like this from the college. The satellite centre at Mansfield’s St Peter and St Paul’s centre recently re-opened so more people can access the food parcels. This donation will go to Mansfield Woodhouse’s Stable Centre and be parcelled up. Agencies then refer families for parcels and we make them up for single people as well as families in need.”
Meanwhile The Stepping Stones group from the college’s foundation studies department collected and creatively wrapped a room full of food, toiletries, hats and gloves which they put in shoe boxes and hampers which are being donated to the Mansfield-based Beacon Project, Framework and Mansfield Soup Kitchen. Staff and students also collected a range of old coats and Not Just Desserts cake shop, based on Toothill Lane in Mansfield, will be placing a clothing rail outside their shop so individuals can benefit from a clean, dry coat.
The Stepping Stones group will be continuing their fundraising into the New Year as they’ve chosen to support Dogs on The Streets (DOTS), a charity dedicated to the welfare of dogs that belong to homeless people. 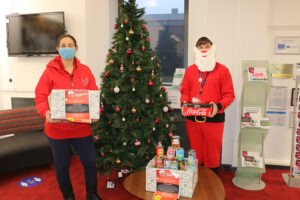 And finally, health and social care students put their new business and marketing skills together, from their recently set-up learning company. Back in October the Level 1 Award in the Introduction to Health and Social Care and Children and Young People’s Settings group provided hampers for The Beacon Project and the Mansfield Soup Kitchen as part of their first exercise with the learning company.
They chose to continue this successful effort throughout December and collected boxes full of food and toiletries for these charities once again.
Principal and chief executive Andrew Cropley said: “It’s incredibly humbling to hear just how many students have been working hard behind the scenes to consider the more vulnerable groups in their communities this Christmas.
“They’ve taken time out of their own busy lives and studies to reflect on other people’s hardships and they’ve worked so hard to bring together food and clothing and toys in time for Christmas. To say I’m proud is an understatement – well done to everyone involved!”