“Classics with a twist” at students’ graduation dinner

Trainee chefs and front-of-house professionals at West Nottinghamshire College are bringing the curtain down on their studies with a special evening in the place where they honed their skills.

The sold-out event, on Thursday 7 June, will see paying customers including friends, family and college principal and chief executive Dame Asha Khemka enjoy a host of specially-created dishes and first-class service courtesy of the ambitious youngsters.

Charlotte, 18, Lucy, 28, and Kaleb, 17, – graduating from the NVQ Level 3 Diploma in Professional Cookery – have combined their culinary creativity to produce a menu packed with seasonal dishes they’re calling “classics with a twist”, inspired by the type of food they like to eat. 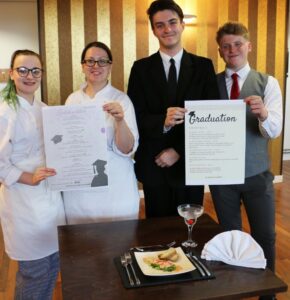 After a pre-dessert of rhubarb sorbet, diners will end their foodie feast with desserts ranging from chocolate coffee delice with coffee mousse, rum crème fraiche and chocolate sauce; to lemon and blueberry cheesecake with a honey tuille, lemon confit and blueberry compote.

Charlotte explained: “We love classic dishes but like to put our own twist on them, so instead of traditional strawberry Eton mess we’ve done a cherry version with marshmallows instead of cream. We’re experimenting while being careful not to take it too far. The important thing is that everyone enjoys our food.”

Keen to cater for families, the trio are also providing a children’s menu consisting of garlic bread with cheese; chicken nuggets with smiley faces and peas; and chocolate brownie, all made from scratch.

Meanwhile, NVQ Level 3 Diploma in Hospitality, Supervision and Leadership students Jake and Sam, both 19, will be whipping-up a selection of original cocktails devised by all five students, each named after one of them, to add “sophistication and originality” to their evening.

Popular Martini and mojito cocktails have been turned into ‘Classic Woolhouse’ and ‘Mojito Murden’ respectively, while other standard-bearers have inspired new creations ‘Almond Hayes’, ‘Wilcockson Comfort’ and ‘Gin Davis’, with inventive ingredients substituting regular ones.

As well as combining their studies with working in Refined – currently Mansfield’s number-one ranked restaurant on TripAdvisor – the students have held down part-time jobs in their chosen professions. They are now eagerly planning the next stage of their careers after leaving college.

Charlotte, from Riddings, Derbyshire, will continue as a chef at Pauline’s Pantry tea rooms in Jacksdale, with ambitions to eventually open one of her own and indulge her love of pastry, desserts and baking.

Fellow chef Lucy, from Mansfield, will see her job at the town’s The Red Bar and Grill become a full-time position before pursuing her longer-term goal of working in a restaurant or pub in a large city.

Kaleb, from Blidworth, plans to increase his hours at The Black Bull bar and bistro, Blidworth, where he works under joint head chefs Lewis Kuciers and Craig Hadden, who are also former students at the college. After that he’s keen to hone his passion for butchery by securing a job at award-winning Maxey’s Farm Shop, in Kirklington.

Sam, from Rainworth, hopes to turn his bar assistant role at Mansfield Town FC’s 1861 Suite into a full-time position and one day combine that with cheffing in a restaurant, having had previous experience. His ultimate ambition is to work on a cruise ship in a catering or hospitality role, which he says would be an “amazing opportunity.”

Meanwhile, Jake, from Sutton-in-Ashfield, will continue as a barman and waiter at Mansfield Town FC’s Sandy Pate Sports Bar before turning his attentions to working as a barista or mixologist at a fine-dining restaurant in Continental Europe.

Charlotte said: “College has been tough but rewarding. It has prepared us to work in a restaurant environment and given us skills that some of us probably wouldn’t have learned otherwise. Above all it’s set a solid foundation for us all to go out and have a good career.”

Jake said: “I had no particular aspirations before joining college but studying has given me so much confidence and extra motivation. Having these qualifications on our CVs will help us get the kind of jobs we’re aspiring towards.”

Describing the upcoming graduation dinner as a “special occasion” for himself and his fellow graduates, Jake added: “It’s a chance for us to say goodbye, show the tutors our gratitude and make sure they know we appreciate everything they’ve taught us.”

Graduation 7 June:
Students (from left) Charlotte Murden, Lucy Wilcockson, Jake Hayes and Sam Woolhouse preparing for their graduation evening in Refined. They will be joined by fellow student Kaleb Davis (not pictured).

Graduation 7 June:
The students have prepared inventive food and cocktail menus for their celebratory send-off.