It’s been a triple celebration at West Nottinghamshire College as two students and a member of staff scooped certificates for exceptional work in their curriculum areas.

Classmates Tom Patrick and Lucas Myles Spence both achieved a commended position for the BTEC Construction Student of the Year category of the annual BTEC Awards, along with computer science tutor Scott Marshall who got a highly commended for Tutor of the Year.

The BTEC Awards is an annual event that recognises and rewards students, teachers, schools and colleges for their exceptional achievements in vocational learning.

Nineteen-year-old Tom, from Mansfield Woodhouse, is currently studying on the BTEC Level 3 Extended Diploma in Construction and the Built Environment.

His tutor Adam Thompson put Tom forward for the BTEC Awards to recognise all of the extra work he has taken on whilst studying on the extended diploma. Tom chose to study an extra unit to develop his skills in structural mechanics as well as further maths.

Adam also highlighted Tom’s predicted triple distinction star grading for his two-year course as well as developing his social skills while coping with Asperger’s Syndrome which he was diagnosed with at the age of five.

Tom said: “Since I began studying at the college I’ve really changed as a person. I’ve developed and grown in so many areas and feel very settled. Having Asperger’s didn’t really bother me until I was 16. As I got older I understood just how it affected me. I hated speaking to people and would totally avoid any social situation.

“Now, I thrive speaking to people and always push myself forwards in social situations and this approach will help me in my career. I’m looking forward to going to study civil engineering at the University of Nottingham.

“I was literally brought to tears when I read what Adam had put about me in this nomination. I feel so appreciated.”

Fellow classmate Lucas Myles Spence, 18, was also nominated by their tutor Adam. Like Tom, Lucas is predicted to complete his studies with a triple distinction star and has been praised for his determination and focussed mind which has seen him put his AutoCAD and drawing skills to the test in a house design competition, earning him first prize.

Lucas, from South Normanton, is looked-up to in class by his peers who often go to him for support and reassurance. Lucas also developed more personal and professional skills on an exchange visit to Estonia last year where he, Tom and colleagues worked on a construction programme to refurbish a school’s sports building.

Lucas said: “I’ve always had a great ambition to become an architect and this course has really helped me to start this journey as well as appreciate all the other roles within the industry. I’ve worked so hard and can’t wait to go on to Nottingham Trent University to study architecture.

“I feel very fortunate to have a commended certificate through the BTEC Awards and to get such recognition.” 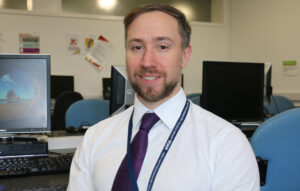 Congratulations also go to computing programme area leader Scott Marshall for his highly-commended status in the BTEC Teacher/Tutor of the Year category of the Pearson BTEC nominations.

Nominated by his curriculum manager Trudi Dean, judges deemed the entry worthy of highly commended. Trudi’s nomination looked at some of Scott’s qualities as a tutor and his general character.

She said: “Scott used to be a computer science student at the college and after completing the HE programme, he trained to be a tutor. He’s been teaching computer science related subjects and been programme area leader for the BTEC Extended Diploma for about 10 years.

“What is very special about Scott is that he hasn’t forgotten what it is like to be a student, so spends a lot of time ensuring his lessons are fun and engaging. He’s an absolute inspiration to his students and is renowned for sharing his innovative ideas with the rest of our staff team.”

Tom, Lucas and Scott join a roll of 70 other staff, students and organisations who have been presented with commended and highly commended certificates for this year’s BTEC awards.

The overall winners of each category are set to attend a presentation ceremony on 5 July at Central Hall, Westminster, London.