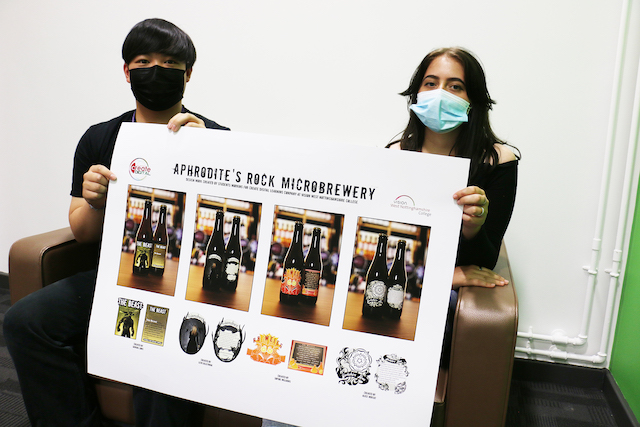 A brewery in Cyprus is raising a glass of beer and cheer to West Nottinghamshire College’s creative media and game students’ design skills.
As part of the creative arts team’s learning company, working on live business projects with real clients is proving to be a success, with a brewery now keen to ask students to rebrand its entire stock.
Four Level 3 Creative Media and Games students Alice Wright, Samuel Long, Levi Lillyman and Sophie Williams were set the challenge to design new product labels for Cypriot brewery – Aphrodite’s Rock. General manager Kevin Paxton, was put in touch with the college through a Cyprus-based friend, who once worked in the college’s creative arts team.
Kevin met the students via Microsoft Teams earlier this year and set them the challenge of redesigning the company’s craft beer labels known at The Beast.
Kevin said: “I’d been told about the great design skills of the students at West Notts College so I set them the project of bringing our old and drab artwork up-to-date. I knew that I wanted to see our products’ label designs jump off the shelves for customers and thought that a craft brewery really needed that young and vibrant look.
“I pretty much gave the students free reign with their designs and we bounced the ideas around over our Teams calls. I was very impressed with their inspiring ideas.”
Using their skills with Adobe Photoshop, the foursome began creating new imagery for The Beast.
Eighteen-year-old student Samuel Long, said: “My design featured a powerful bear-type creature. I sketched my ideas and passed them to Kevin and we worked together and adapted some elements. The creature then became a kind of devil man! I feel proud that my idea is likely to be going into production on the beer bottles.”
Meanwhile 18-year-old Levi Lillyman’s designs featured a female character. She said: “My idea changed from an original Greek goddess, luring someone into the water. She becme a dark fairytale creature but the mysterious element of my design remained.”
Established eleven years ago Aphrodite’s Rock Brewery currently has a range of 8 beers and 6 ciders which are sold in-house at the adjacent restaurant and bar, with new products being developed soon. Kevin is so impressed with the students’ work that he’s asked them to design the company’s entire stock.
He said: “I would really like them to produce a whole range of designs that we can completely relaunch. I am so happy with the first four designs they’ve produced.
“We will be ready to produce the labels once the students have completed the whole range and our new logo is complete. Then we’re hoping to launch another brewery in another location and expand the brand even further.”
The design and media’s learning company specialist Tony Hall, said: “Our students should be very proud of the work they’ve produced for Kevin. Working for real clients gives them the best experience of how running a design business works.
“Kevin has very kindly offered for the group to visit the brewery in the near future, so they can see their work on the bottles. I’m delighted with the way they managed this project and to see their professionalism really shining through.”