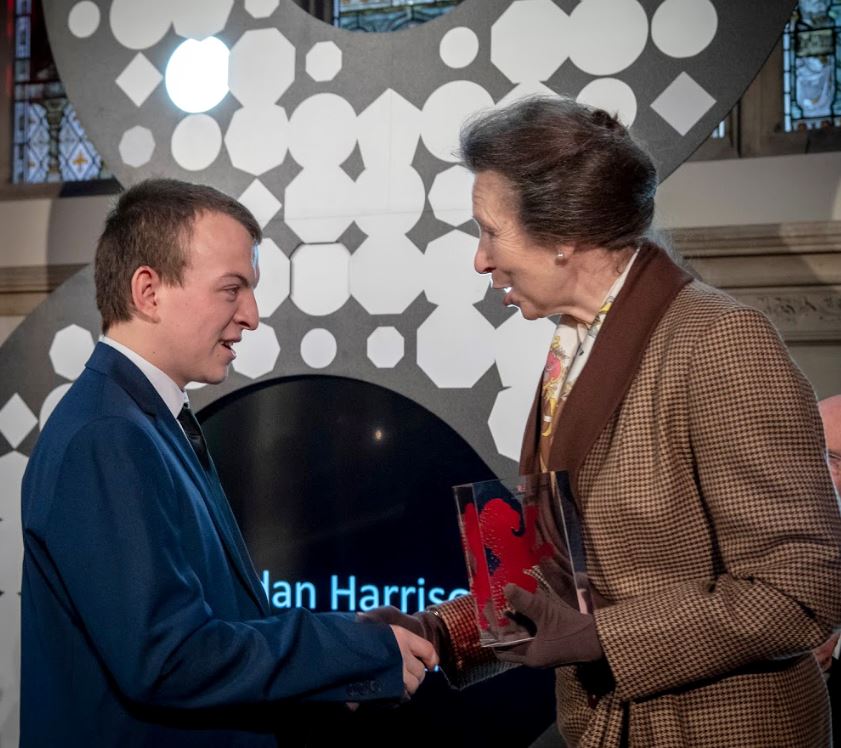 A construction student from West Nottinghamshire College has returned from the capital with a prestigious national award – with royal approval.

Jordan Harrison, 20, from Sutton-in-Ashfield, was presented with the Lion Award on 30th January at the Guildhall in London, in the presence of HRH The Princess Royal and the Right Honourable The Lord Mayor of London, Alderman Peter Estlin.

Back in September 2018, Jordan proudly received a City & Guilds Medal of Excellence following his tutor’s nomination which praised him for his commitment and dedication on his joinery qualification, and coping through health problems.

It was when Jordan received this award that he learnt he was going to be presented with the Lion Award, the City & Guilds’ most prestigious trophy. And out of all the Lion Award winners yesterday, Jordan was chosen as the national winner – Learner of the Year – one of just five national prizes awarded on the day.

Jordan’s tutor and programme area leader Andy Whyley, said: “Jordan has done brilliantly with his studies and I was so incredibly proud to see him collecting his Lion Award. It’s truly well-deserved as he’s always shown great determination and effort. He’s doing incredibly well on the Level 3 BTEC in Construction and The Built Environment now.

“I was honoured to cheer him on yesterday in London. If ever there was a student who others can aspire to – Jordan’s the man!”

Jordan, who works as a bench joiner for Mansfield-based commercial joinery specialists, Realm Projects, said: “It was so overwhelming and exciting at the awards. The Guildhall is a very large venue, and it makes you feel important. It was so good to meet Princess Anne and speak to her. She asked me how my work was going and what I want to do with my future.

“Having my tutor Andy and my mum there was special. Mum is so proud – and I’m proud of myself too. It’s a big accomplishment.”


More about City & Guilds’ Medal of Excellence and Lion Awards
As a world leader in global skills development, City & Guilds wants to inspire people to believe in themselves and unlock their potential. We believe learning has no limits, and that’s why it’s important to celebrate outstanding achievements.

The City & Guilds Medal for Excellence is a distinguished work of art whose design has remained largely unchanged since 1880.

As well as being awarded with a medal, each medal winner is in the running to win one of the coveted Lion Award trophies. The Lion Awards event – City & Guilds’ most prestigious awards ceremony – acknowledges the best of the best in a range of categories including our centres. Once the medals have been awarded, a judging panel sits down to consider who they would like to nominate for a Lion Award. The winners will be announced at the Lion Awards event and will find themselves going home with their very own Lion Award trophy.