Pudsey and co pedal to raise the pounds at college 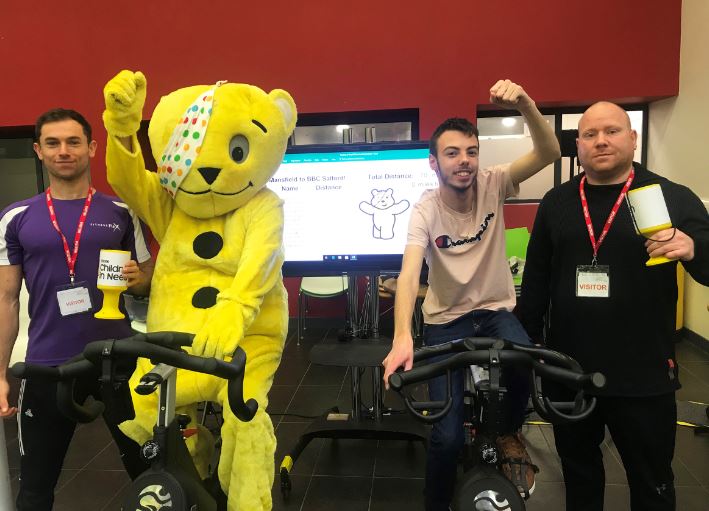 West Nottinghamshire College had a visit from the nation’s favourite yellow bear as he helped out with the popular Children in Need fundraising activities on Friday 15 November.

Pudsey joined the Students’ Union president for the Derby Road campus, Lewis Thacker, and student representatives Callan Kemp and Josh Levy who organised a bustling lunchtime event featuring fun activities designed to get the cash rolling in for the annual fundraiser that helps disadvantaged children and young people in the UK.

Pudsey took a walkabout posing for selfies with students while filling his collection tin with kind donations.

The main activity was a stationary bike ride challenge from Mansfield to Salford – home to the BBC’s Manchester studios, MediaCity – in partnership with Fitness Flex Mansfield. Students took it in turns to cover the distance equivalent to 70 miles. Even the college’s principal and chief executive Andrew Cropley took to the saddle to help clock-up the miles. Fittingly, it was Pudsey and Callan who cycled the last few miles which saw the 70-mile target achieved.

Meanwhile, hair and media make-up students Beth Chilvers and Amber Bennett took time out of the classroom to offer colourful hand and face paintings of Pudsey and his colourful spots for £1 donations.

People also paid donations to be in with a chance of naming the Students’ Union’s Sepsis Aware Bear. All names available to pick were named after the kind of symptoms that can be associated with sepsis. These educational bears are then passed onto members of the community to learn the vital health messages which the bears carry around their necks.

There was a guess the number of sweets in the jar to try and win the entire contents. The sweets were won by Bethany Carter-Brown, outreach project officer in the DANCOP (Derbyshire and Nottinghamshire Collaborative Outreach Project) whose guess of 142 sweets was closest to the actual total of 145.

The name the Sepsis Aware Bear competition was won by employability and work placement co-ordinator for creative and digital industries, Julie Hough. The name Numb Nora was picked out of the hat which saw Julie win a cone of sweets. 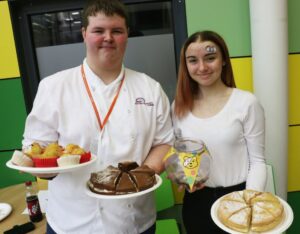 Other student groups also got involved with the fun and fundraising, including Level 1 Childcare and Education students who dressed in their pyjamas for the day in exchange for donations.

The activities helped raise a total of £260 for Children in Need.

Students’ Union president Lewis Thacker said: “The event went really well and there was so much engagement from across the whole college. The cycle-to-Salford event was particularly popular and I’m delighted we achieved the full 70 miles. Thank you to everyone who put the charity stalls together and it was lovely to see so many students showing their support.
“I must say a special thank you to Callan and Josh for their invaluable help in putting together such a fun and well-managed event.

“We’d like to say a special thanks to Fitness Flex Mansfield for loaning the exercise bikes and supporting the bike ride challenge, which was a key part of our fundraising activity.”