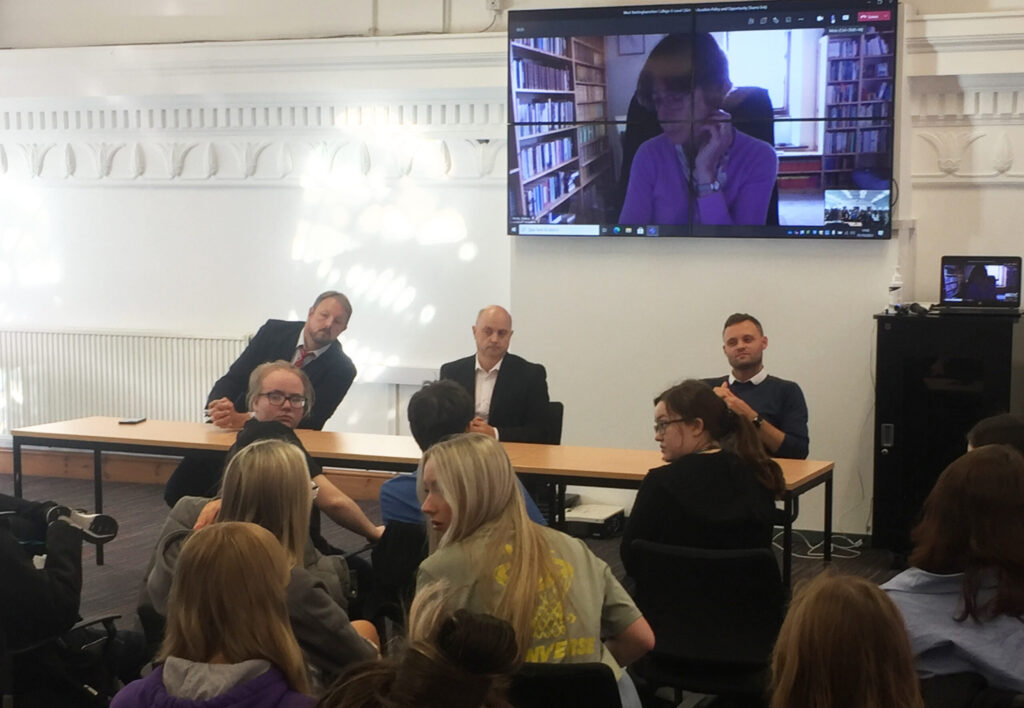 A-Level students at Mansfield and Ashfield Sixth Form College in Mansfield have posed educational policy questions to a panel of local decision-makers.

The sixth form college which is part of West Nottinghamshire College is now home to its A-Level students, who are studying a range of subjects including business, law, politics and sociology. It was students from these classes who welcomed a panel of guests on Friday (1 October).

Sharon Huttly joined the panel and the group of around 80 students via Microsoft Teams. Held in the college’s lecture hall, students confidently posed questions around education and careers.

Topics such as careers guidance for young people in the area were raised by students which prompted good debate. Learners also spoke about the impact of taking exams versus not taking exams during the pandemic.

Other matters for discussion included how college and school building improvements are funded in the UK and students weighed up the pros and cons of how funding is distributed for maintenance of buildings as well as for classroom activities and materials.

There was good debate between students and the panel about how the A-Level option doesn’t suit everyone and they discussed how can other study pathways can be promoted more to young people.

Toby Perkins, Labour MP for Chesterfield, said: “The students were fantastic. They covered a variety of political things from policy choices and how things impact on people’s lives. We’ve heard their nervousness about sitting exams as well as concerns about funding, also about how whether there’s too much emphasis on A-Levels and university compared to other routes of study in the FE sector.

“There were some really powerful responses from students saying what they thought about these issues. They’ve clearly given things a lot of thought.”

MP for Mansfield, Ben Bradley said: “I always enjoy coming to speak to students at the college and it’s brilliant to see the level of engagement and curiosity both about politics and the very pertinent issue of education policy.“It’s also a chance to share and to promote some of the good work the college is doing in our community, investing in new facilities and partnering with Nottingham Trent University to offer an ever-improving local opportunity to young people. I look forward to coming back and doing it again soon.”