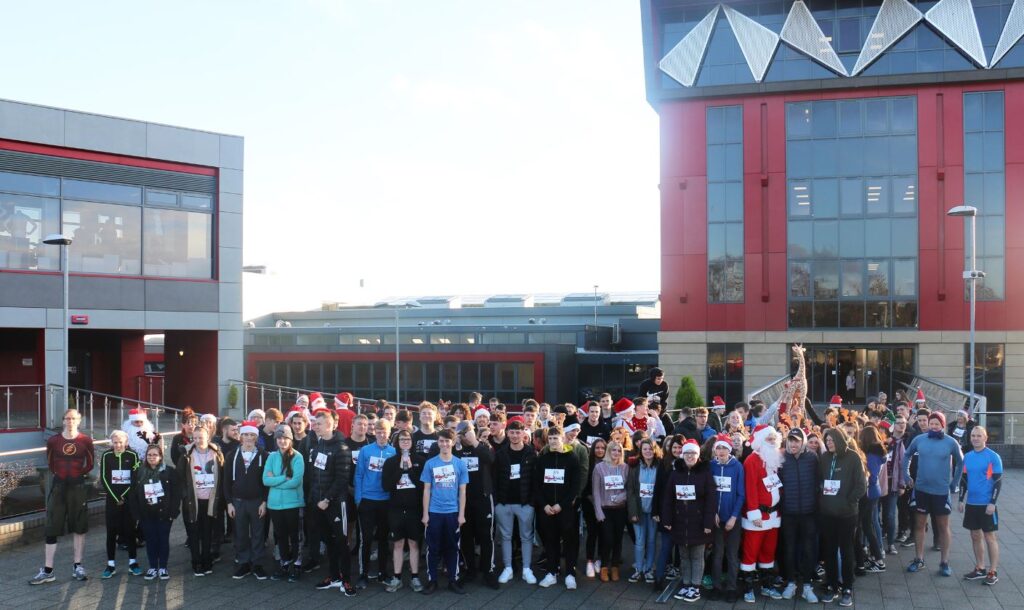 West Nottinghamshire College students were seen running away from the Derby Road campus in droves on 19 December – all in the name of festive fundraising.

Over 140 runners took part in the annual 5km Santa fun run from college, to Berry Hill Park and back, dressed in an array of Christmas-themed costumes.

Setting the race off at the starting post was Tim Cooper, Mansfield Night Shelter’s project co-ordinator, which is part of the Derby City Mission. Tim thanked participants for raising money for the vital service before they headed off on the run.

There were some impressive finish times. In the boys’ category the joint-first positions went to IT student Owen Shaw and sport student Harry Bates with, while computing student Chris Burton came second.

Everyone who took part, along with the volunteer marshals and organisers were given a raffle number to go into a draw to win goodie bags and John Lewis and Four Seasons Shopping Centre vouchers.

Tim Cooper proudly received a cheque for £350 which will go towards longer-term projects across the six churches that are all part of the Derby City Mission which supports rough sleepers from 1 December through to 28 February – the coldest months of the year. An additional £52 was further collected to be passed to the shelter.

Sport development team leader Rob Shaw said: “It was great to see so many willing students getting involved in this year’s run. The weather was kind to us and everyone seemed to have so much fun.

“On a serious note, to be able to help fund the night shelter’s work through our sponsorship money is really humbling. Homelessness is a plight which students regularly wish to support and we’re proud to have helped.”