The force is with us – thanks to Nottinghamshire Police 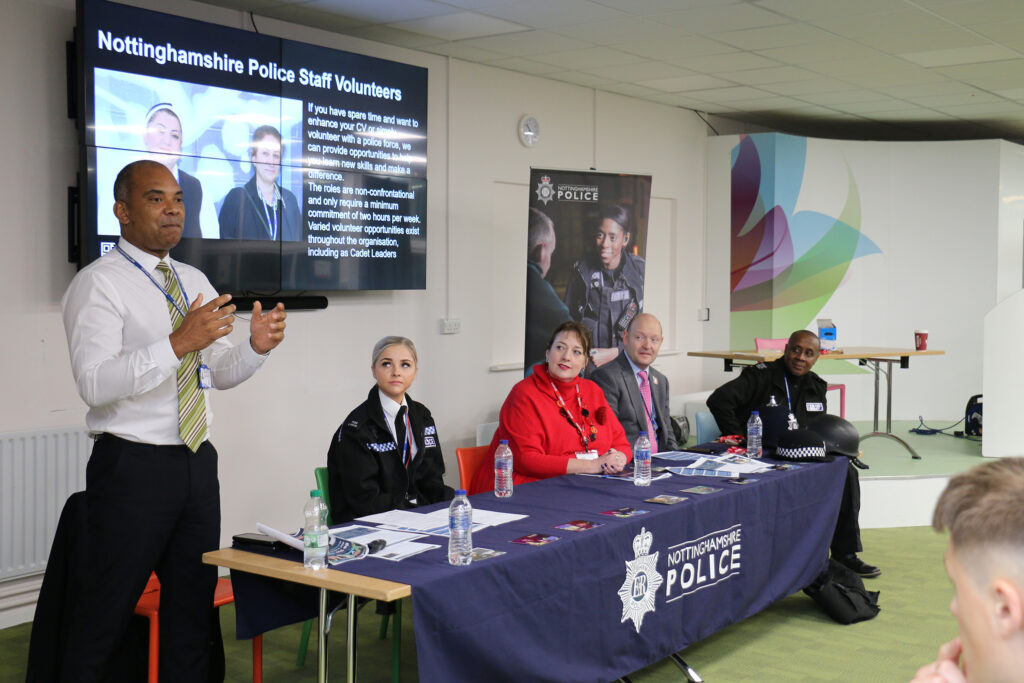 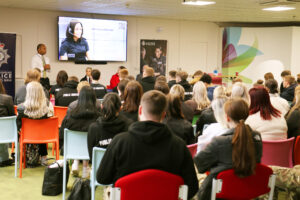 Students from the uniformed protective services and A-Levels curriculum joined Nottinghamshire Police’s chief constable Craig Guildford and colleagues at the college’s Derby Road campus to discover more about the range of jobs available including entry routes.

Police and crime commissioner Caroline Henry also spoke about policing, community needs and law and order within Nottinghamshire including current issues with funding and resources.

The question and answer session enabled learners to enquire more about the police constable degree apprenticeship (PCDA) which sees applicants join as a constable and undergo degree-level training over a period of three years.

Other careers were covered such as the 999 call dispatcher which is open to applicants aged 18 and over. This telephone based job sees the operator taking calls from members of the public covering all crimes, such as, burglary, theft, racism and violence as well as road traffic collisions.

The role of detective constables was profiled and students discovered that following studying a degree, this position follows a two-year programme supported by off-the-job learning to gain a Level 6 graduate diploma in professional policing practice and can lead to job specialisation and promotion.

Apprentice officer Ron Lawrence MBE, PC Eden Session and careers advisor Nigel Best, were also on the panel speaking about their own roles within the police force and the opportunities which exist across the county as well as at the Arnold-based headquarters office.

Home Office figures show Nottinghamshire Police had 2,226 officers at the end of September 2021, up by 247 (12.4 per cent) since October 2019, swelling the force’s officer ranks to its highest number for a decade.

Chief Constable Craig Guildford said the force had embarked on an intensive recruitment drive and that it was continuing to become more representative of the communities it serves.

He said: “It was my pleasure to attend West Nottinghamshire College and speak to students about the differing routes into policing and I am pleased the feedback from them was extremely positive.

“Not since 2011 have we had so many officers out on our Nottinghamshire streets and we are continuing to bolster our ranks.

“The more our police officers represent the communities we serve, the more we understand their needs and concerns and the better we work together to make communities safer and stronger.”

Public services teacher James Maosa said: “So far, we have up to 50 students who are keen to join the police force. They found this event very informative and it will help them prepare for interviews, physical assessments and focussing on the academic requirements.

“Information is key when preparing for careers. Hearing the panel’s personal experiences can only be passed through such visits. We look forward to hosting Nottinghamshire Police again to such events.”

Uniformed protective services year 1 diploma student Reece Budd, 16, said: “I found this event really helpful. Originally I was really struggling to find opportunities in the police force. I knew that I wanted to join but I was stuck with how to get in. Everyone was really helpful today especially with apprenticeships information.

“I didn’t know much about apprenticeships before the careers event and now I do. I’m striving to get an apprenticeship and I’m hoping to get some work placement very soon too.”