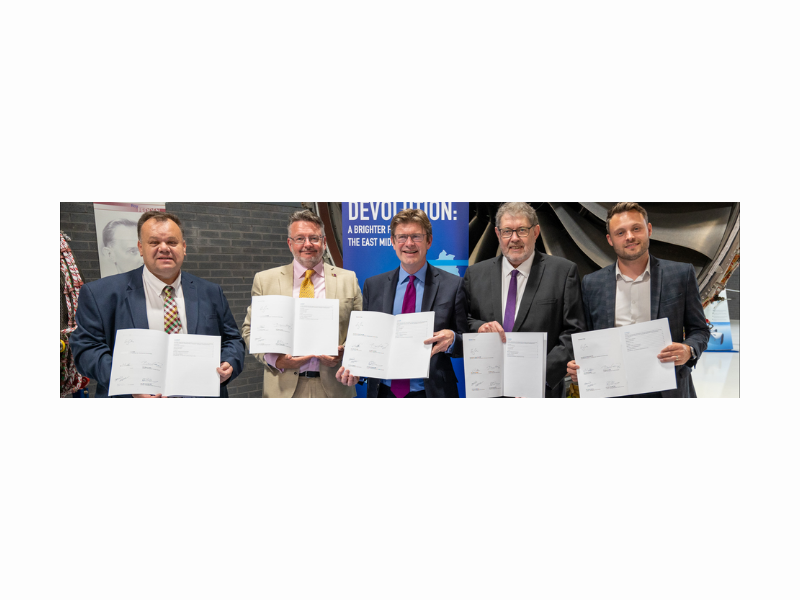 The Government has confirmed that a £1.14 billion devolution deal is on offer for the East Midlands, covering Derbyshire, Nottinghamshire, Derby, and Nottingham.

The deal will provide the region with a guaranteed income stream of £38 million per year over a 30-year period. Covering an area home to around 2.2 million people, an East Midlands combined authority would be one of the biggest in the country.

All four city and county council leaders in Derbyshire, Nottinghamshire, Derby, and Nottingham have signed up to work on this devolution deal with the government.

The councils will work on the details of the deal and each council will take a report to approve a more detailed proposal for a consultation later this year, so that residents, businesses, and other organisations can have their say.

The deal is one of the first of a new type of combined authority, requiring new legislation from central government. As well as the £1.14 billion, it includes an extra £16 million for new homes on brownfield land, and control over a range of budgets like the Adult Education Budget, which could be better tailored to the needs of people in our communities.

The devolution deal is a level 3 deal, which offers the most local powers and funding. It would mean a new elected regional mayor, like those in other areas such as the West Midlands and Greater Manchester, who would represent both cities and counties. The role of the mayor would be to look at major issues affecting the whole region, give the area more of a voice, and take advantage of local knowledge and expertise.

The deal means that a future mayor and combined authority could:

“We welcome the £1.14 billion devolution deal from the Government on offer for our region. It’s fantastic news.

“We want to make the most of every penny so this can be used to make a real difference to people’s lives.

“As Leaders, we have all fought for a fairer share for our cities and counties, and a bigger voice for our area, to give us the clout and the influence we deserve, and to help us live up to our full potential.

“This deal would help make that a reality, creating more and better jobs through greater investment in our area, with increased economic growth, better transport, housing, skills training, and an enhanced greener environment, as we move towards being carbon neutral. These are what we all want to see, and we will work together for the common good of the East Midlands.

“We haven’t always had the same level of funding or influence as other areas, which has held us back. This is a golden opportunity to change that and put the power to do so in our own hands.

“There is a lot still to be agreed, and this is the beginning of the journey, not the end. We’re determined to build on this deal over time, as other areas have done.”

Greg Clarke MP, the Secretary of State for Levelling Up, Housing and Communities, said:

“Today is a momentous one for the people of Derby, Derbyshire, Nottingham, and Nottinghamshire as we sign our landmark devolution deal, placing power and funding it into the hands of the local leaders who know their areas the best.

“Devolving powers away from Whitehall and giving local leaders the resource to determine their own destiny is at the heart of our levelling up agenda and this devolution deal does exactly that.”

The four councils sent initial proposals to negotiate a combined devolution deal back in March, after being named as pathfinder areas by the Government in February and then being invited to apply for a devolution deal. The councils have been working with the Government to develop details of the deal, alongside discussions with district and borough councils, businesses, and other stakeholders.

If the devolution deal is formally approved, the Government will pass legislation bringing a new combined authority for the East Midlands into existence. The first election for a regional mayor for Derby, Derbyshire, Nottingham, and Nottinghamshire, would then be in May 2024.

The regional mayor would lead the new combined authority, which would also include representatives from local councils, with decision making powers and resources moving from London to the East Midlands.

This would not mean scrapping or merging local councils, which would all continue to exist as they do now and would still be responsible for most public services in the area. The mayor and combined authority would instead focus on wider issues like transport, regeneration, and employment across both cities and counties.

Adam Hill, Chief Executive at Mansfield District Council said the deal should support and accelerate regeneration and growth plans across the district.

He said: “This historic deal is not just a step, but a potential giant leap in the right direction for Mansfield district. It will enable a strong local voice at the table, whilst protecting local democracy, and allow Mansfield district to punch its weight as a major player in the East Midlands. We will be able to continue building on our strong local partnerships, as well as develop partnerships on a regional and national basis, with the support of our anchor institutions, to effect radical change for the benefit of our communities.

“I truly believe this deal will encourage and attract investment to support regeneration and growth in industry, manufacturing, green economy, and digital technologies – district wide. We anticipate it will transform the perceptions of the town – reinforcing a new sense of purpose, economic and cultural viability.

“The list of how the Mansfield district will benefit from this deal could be endless. We will look to the deal to support the decarbonisation of our existing housing stock, as well as grow the portfolio too. Local training and skills opportunities will be aligned to future employment needs. We hope to be able to support local businesses and enterprises – as well as help to retain our local talent in the town. We will strive to influence and make our voice heard on the strategic transport links and how these can be further enhanced to and from Mansfield across the region.

“All in all, we hope Mansfield district will be a huge benefactor from this deal, and we are looking forward to the coming months and years ahead where we can work with our partners to deliver the benefits of this deal for our residents.”

Read more about the deal on the governments website here https://www.gov.uk/government/publications/east-midlands-devolution-deal

Find out why devolution matters to your business and how you could influence the direction of business support along with wider concerns such as skills and transportation for Ashfield and Mansfield by attending our next Business Breakfast on 30th September at Portland College. Our guest speaker Ben Bradley MP will be sharing more about devolution and what it means for you.

Business will also be invited to a consultation event to be held at West Notts College on Thursday November 11th where we will hear from guest speakers and be given the opportunity to ask questions about how devolution will impact our local area. More information will follow soon.