A-level students at West Nottinghamshire College are celebrating their exam results and the grades that will see them take their next steps onto university, an apprenticeship or employment.

On A-level Results Day and the college announced an overall pass rate of 99.7%.

STEM subjects – biology, chemistry, physics and maths – continued to perform strongly, with each subject seeing a 100% pass rate and a combined 65.8% at A*-C, with an average of grade B across each.

Students receiving their results today were examined under the revised A-level system following national reforms brought in last year, which saw the introduction of new syllabuses and final grades determined mainly by exams following the end of each two-year course. Revised AS and A-levels are now two entirely separate qualifications, with the AS no longer counting towards the full A-level.

Principal and chief executive, Dame Asha Khemka, said: “This is the second year that our A-level students have been tested under the revised, even tougher system, and despite widespread talk about the impact this could have on high grades and pass rates nationally, once again they have risen to the challenge and performed extremely well under such rigorous conditions.

“It’s particularly pleasing that the number of students achieving A*-B high grades has increased significantly, which means even more are meeting the criteria of selective universities.

“All this means our students are extremely well prepared for their next steps, whether progressing to university, an apprenticeship or other employment. Their hard work and application, together with the support offered at the college, has given them the confidence and desire to continue to achieve on their chosen pathways.

“Congratulations to each student, to their families who play such an important role in supporting them, and of course to our staff, who have given each learner not only the knowledge and study skills to fulfil their potential, but the mentoring and guidance to develop as individuals.”

Josh Troup secures 3As in biology, sociology and history

Josh Troup, 20, from Nottingham celebrated a clean sweep of A* grades in biology, history and sociology.

He said: “I’m so happy – I can’t describe how I feel. This has absolutely exceeded my expectations because I thought I may get three As, so this is amazing. I never conceived I’d get these at all.

“But I’ve put in a lot of hard work, particularly in the months leading up to the exams – I was pretty much sat revising in my bedroom all day, every day. It was draining at the time but in hindsight I’m very glad I did it; it’s definitely paid off.

“And my teachers were really good. The teachers at this college, especially in the A-level department, are exceptional. I’ve always been challenged, and they’ve given me a t 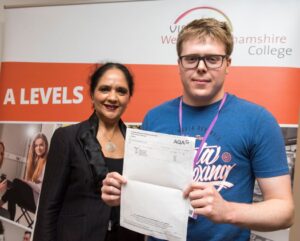 ough workload – but it’s what you need in order to succeed.

“Next up is Durham University to study law. Right now my career ambition is to become a corporate lawyer at a top legal firm in London but I’m open to that changing as I experience different areas of law at university.

“I’ll be going out with my friends tonight to celebrate.”

Twins Ryan and Alex Brewin, 18, from Mansfield Woodhouse studied the same subjects and achieved almost identical results – A* in maths and As in both biology and physics. The only thing that separated them was Ryan’s A* in chemistry, with Alex achieving A in the same subject.

Ryan said: “It feels great to receive these results. I’m quite surprised actually – I didn’t think I’d do this good. It’s down to a lot of revision, both at college and at home, and the teachers have been brilliant.”

Alex said: “I’m very happy with these results – buzzing in fact. West Notts has been absolutely amazing; the teachers, our fellow students, everything. We’ll really miss it. We’re looking forward to having a night out to celebrate our success.”

The former classmates are now set to study at the same institution once again – the University of Sheffield – where Alex will study bio-medical science and Ryan chemistry.

“It means I’m going to have to put up with Ryan for a little bit longer!” said Alex.

Megan Cooper, 19, from Sutton-in-Ashfield achieved A* in sociology, A in her EPQ and B in law.

She said: “I’m amazed and so happy because I didn’t think I was going to do this well. I’ve been through a lot of personal stuff and didn’t know how that was going to affect everything. But I’ve had all the support I could have possibly needed at college.

“A lot of hard work and revision have gone into this; pushing myself further than I thought I could go, to the point where I didn’t think I could possibly revise any more.

Megan is now set to study international relations and contemporary politics at the University of Leicester.

“I’m massively excited about what the future holds. I’d like to join the secret intelligence service after I graduate.

“I’ve got a meal booked with my dad and my sister to celebrate, and we’ll toast my success tonight. Then I’ll get ready for uni and start packing. I’m looking forward to university; I can’t wait to move on in my education and study something I really care about.”

Olivia Beavers, 19, from Eastwood was delighted to achieve A grades in both law and psychology and a B in sociology.

She said: “These grades are what I thought I would get, so I’m very pleased! It’s been a tense morning waiting, but I was thrilled when I opened the envelope.

“I’m so glad as it means I can go to the University of Sheffield to study psychology. I’ll be celebrating with my mum tonight.”

Johnathon Kemp, 18, from Pleasley, Mansfield, achieved A* in his EPQ, and straight As in chemistry, physics and maths.

He said: “I’m feeling kind of shocked right now! I was expecting the results to be a lot worse, but now I’ve opened them I’m very relieved.

“I’ve got the grades I need for my first-choice university, which is the University of Birmingham where I’m going to study computer science.

“In terms of a career, I’m hoping to figure that out while I’m at university. I don’t really mind as long as it’s in the technological sector, so something like software development.

“For my EPQ I developed a virtual reality programme. It was challenging to begin with, because VR is quite a new technology for consumers, but once I figured out the logistics of it, it was much easier.”

Emily Smith, 20, from Wingerworth, Chesterfield described her As in both sociology and history and B in English language as “far better than I expected.”

“I’m just so emotional and shocked – I haven’t stopped crying since I opened my results!” she said.

“College has been a good experience and I’m now looking forward to going to the University of Sheffield to study philosophy and history. I’m not sure what career I want just yet, but once I begin
my studies things will become clearer.”

Ben Mainwaring, 18, from Mansfield was “very happy and surprised” with his A in history, B in English language and C in maths.

He said: “I didn’t expect to have done as well as I did. It’s like a personal achievement really because I’ve been working towards this for so long – it’s like finally getting to the end goal.

“I’m now going to the University of Lincoln to study history. I’m very excited to be able to go and experience uni and I’m really looking forward to it.

“West Notts has been brilliant. A lot of the stuff we’ve studied in class has really prepared me for the kind of work that is going to be coming, and the teachers have been brilliant. They’ve given me lots of extra work to do and lots of support, which has definitely helped.

“Career-wise I’m thinking I’d like to become a primary school teacher and I’m using a history degree as a path towards that.

“I’m going out for a meal with my girlfriend tonight, so that’s going to be the main celebration.”

Louise Reed, 18, from Church Warsop, Mansfield was “thrilled” that her results envelope revealed straight As in sociology, English literature and in her EPQ, and a B in history.

She said: “This morning I was fairly pessimistic as I thought I’d done badly in my exams – I didn’t sleep at all last night – so I was thrilled when I found out I’d done well!

“At first when I opened my results I saw a letter ‘F’ at the top of the page, which indicates gender ‘female’. I panicked and thought that was one of my grades!

“These results mean I can now go to the University of Nottingham to study history. My career ambition is to be a secondary school history teacher, so that’s what I’m aiming for.

“I’ve booked three days off work and I’m going to be celebrating tonight.

“Life at West Notts has been great and my personal tutor, Viv, has been fantastic throughout.”

West Nottinghamshire College offers one of the largest choices of A-levels under one roof in Mansfield. It also offers a wide range of vocational and higher education qualifications including HNDs, HNCs, foundation degrees and full honours degrees.