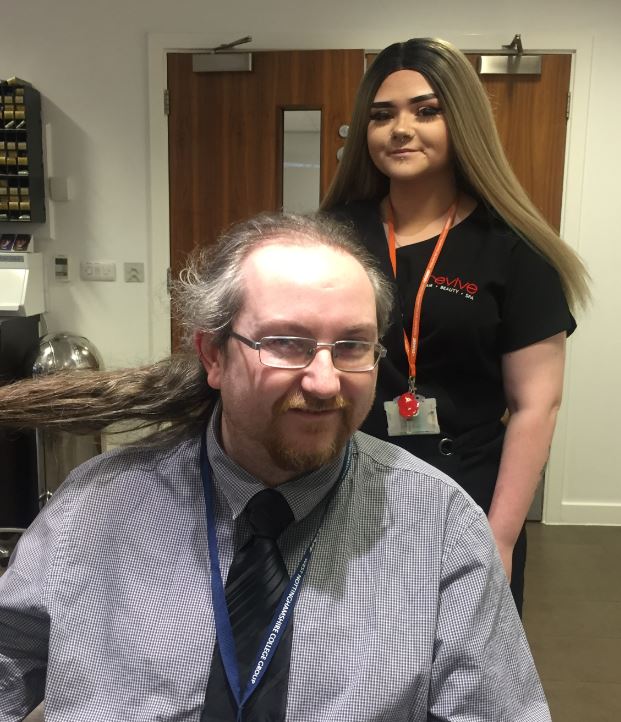 Considering shaving one’s head for charity could make an individual think twice – but not for West Nottinghamshire College staff member Andrew Spencer – he’s just taken such a challenge for the second time!

Applications developer Andrew, 34, had his long locks shaved off today (16 January) in the college’s hairdressing salon, and will be helping three charities through this kind act.

Andrew first had his head shaved ten years ago, when he was challenged by a colleague to take the plunge in aid of Cancer Research UK. He went for the chop and his infamous ponytail took pride of place on the staff noticeboard after his brave act! It was this lady who inspired him to do it again, after she sadly passed away with the disease in 2019.

This time the ponytail will be making its way to a charity which can make use of human hair to create wigs for people who require them due to losing hair through cancer treatments or other conditions.
Andrew, who was a student at the college 15 years ago on the HND in IT programme, said: “We all know people who’ve been affected by cancer; it’s a terrible thing, a scourge. It’s hurt friends and family; it’s took them away from us.

“This is why I want to raise cash in this way for Cancer Research UK as well as John Eastwood Hospice in Sutton-in-Ashfield. Also, I hope my hair can go towards helping create wigs for children.”

Throughout his fundraising mission, Andrew has been speaking to friends and colleagues whose lives have been affected by cancer to get a deeper understanding of how cancer affects individuals and families and has created some short videos which he used to help boost awareness and funds.

The head shave, watched by friends and colleagues live on Facebook took just a few minutes and Andrew’s plaited ponytail, measuring 34 centimetres will be on its way to charity imminently.

Andrew added: “I just want to thank everyone for their amazing support both in terms of donating cash and to speaking with me about their experiences with cancer.”

Andrew will continue to raise funds for both charities and people can donate at Cancer Research UK or John Eastwood Hospice.