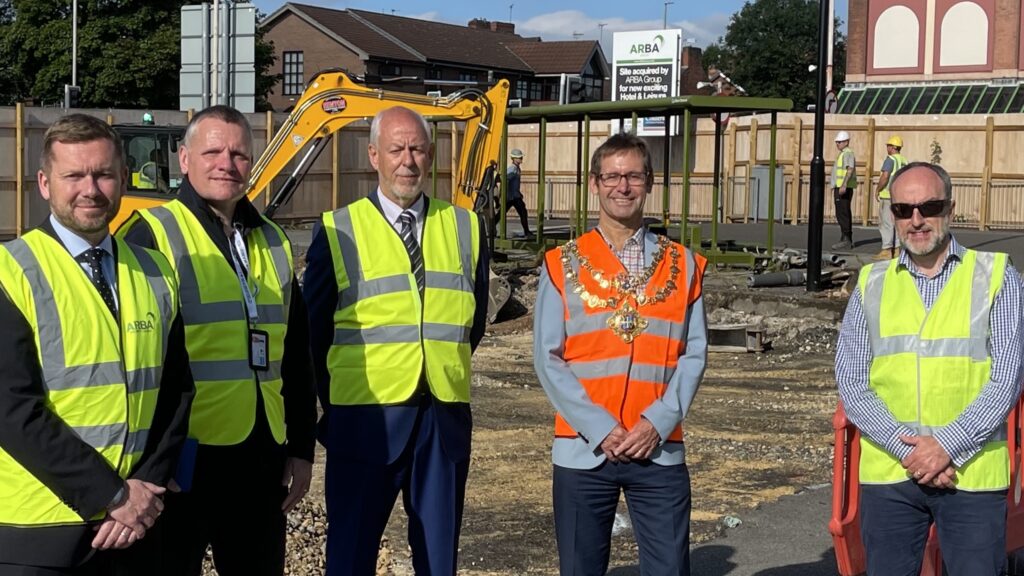 Work has started on the £12m transformation of Mansfield’s old bus station site into a leisure hub that will form an exciting and modern gateway to the town centre.

The Mansfield-based ARBA Property Group is driving forward the Stockwell Gateway development that will eventually see a hotel and three restaurant facilities at the site.

Following a formal competitive tender process, ARBA has engaged Tanbry Construction, based in The Broadway, Mansfield, as its main contractor for the scheme.

Tanbry has already begun work on the first phase, to clear existing surfaces where the three restaurants are to be sited, and to excavate foundations for the steelwork.

It is expected that the restaurants will be handed over to the occupiers to carry out internal fit-outs by Spring next year.

Richard Burns, managing director of ARBA, said: “There has been a lot of work into getting to the starting line with this project, which should prove to be a superb place for Mansfield.

“The world of construction is very different these days, with rising costs and supply chain issues, but we have worked hard on getting everything in place and we are delighted that work has started.”

And he added: “As well as Mansfield District Council, we are really pleased that we are able to work with partners that have close links to Mansfield. The majority of the consultant team also hail from, or live in, the Mansfield area.”

ARBA’s proposals to revitalise the former bus station site were given the green light by members of Mansfield District Council’s Planning Committee in November 2020.

World-renowned chains Taco Bell, Tim Hortons, and Domino’s will all take up the three new spaces being created at Stockwell Gateway.

Mansfield’s Executive Mayor, Andy Abrahams, said: “The redevelopment of this key site will be a catalyst for Mansfield’s future growth and investment. The hotel and eateries will be instrumental in increasing the number of visitors to the town centre and the time and money they spend here for the benefit of our local economy.

“Recent times have been tough for everyone including the construction sector, and it’s great to see work get underway on site. I’m especially pleased that the scheme is using local talent as this is in line with the council’s new procurement strategy, which puts a greater emphasis on supporting local businesses while also taking into account social, environmental and economic factors when obtaining goods and services.”

Rob Bryant, managing director at Tanbry, said: “It’s brilliant that even in these challenging times, ARBA has put together a largely local team that has truly focused on bringing forward a project that will create jobs and boost the town centre in Mansfield. The majority of our sub-contractors and suppliers are Mansfield based, which is also a positive for the local economy.”

David Stevenson, Director at Edmond Shipway Project Management Consultants, added: “Mansfield has a proud history, and it also has potential to be a go-to place in the future, with the Stockwell Gateway development being a major part of the town’s future success.”

Calculations show that up to around 140 jobs will be created by the project, and that it is forecast to inject £5m into the local Mansfield economy every year.