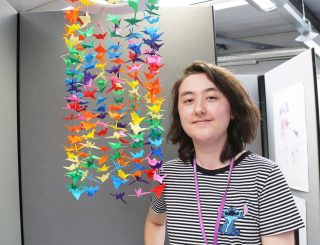 The 2018 Arts Fest launched on Wednesday 13 June in the college’s state-of-the-art visual art and design centre at the Derby Road campus and welcomed students and their family and friends, as well as staff and councillors from Nottinghamshire County Council and Ashfield District Council.

Amongst the students proudly exhibiting their work were those studying art and design, graphic design, media, multi-media, and music. Featuring this week will be shows from performing arts students in the Create Theatre as well as creative media interactive displays.

Eighteen-year-old Chloe Edson, from Alfreton in Derbyshire, is studying the Level 3 BTEC National Foundation Diploma in Art and Design. She exhibited a piece of work inspired by seashells.

Chloe said: “We had a project where we were looking at shells. I chose one from a selection and we were then asked to portray it in our own chosen way. I chose to look at textures and colours which you can’t see with the naked eye. I was inspired by petrie dishes and microscopes so this is why they’re circular.

“I represented them in acrylic, ink, engraving and embroidery. The artwork took me around a week in-between other projects.

“The course has given me a lot of insight into what I want to do next. I have another year on this course and I’m looking forward to refining my skills.” 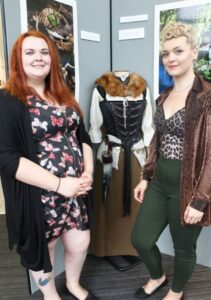 Later in the evening, performing arts students put on the tragic Sophocles play Antigone, for guests in the college’s 150-seat Create Theatre.

Jessica Kerridge, 20, from Blidworth, is studying the BTEC Level 3 Extended Diploma in Art and Design and is in year two. Her project was based on Norse mythology.

Jessica said: “I designed and put together the costumes which is a combination of my own needlework and charity shop finds. I found it quite tricky to research Norse mythology – it seems to be quite a forgotten part of history, so I wanted to bring it back in an authentic way.

“It took about two months to prepare and set up my project and then I did a photoshoot in a local park where I got two friends to model the costumes. I also produced a Norse totem altar which they originally used to pray to the gods for luck and protection while out hunting.

“Eventually I’d love to exhibit my artwork somewhere in London and at a bigger exhibition place.”

Meanwhile Molly Veal, 17, from Mansfield, had a very colourful exhibition.

Molly said: “I didn’t make a thousand, but probably about three hundred as a representation of the story. I learnt origami when I was very young and always wanted to do this. I like the traditional story where a young child was ill and her community made a thousand paper cranes to bring her luck and health.

“I’ve done origami as a hobby for years and I wanted my exhibition to be very colourful.”

Second year A Level student Ben Hague had the largest exhibition stand for his photography project.

The sixteen black and white photographs made up a two by three metre display. Ben created the piece on a farm at night, with clever use of different light sources and two cameras.

Ben, who is studying A Levels in fine art, chemistry and English literature, is progressing to the University of Derby to do a BA in photography. He said: “The shot was taken on a 4×5 large format camera and I built a light to go in the back of a spare camera and projected it to go on a wall.

“The lighting behind the vehicle is actually burning steel wool being thrown overhead. We also used an LED torch for other lighting. I wanted to continue the theme as I’d been doing a portraiture project depicting cars as an expression of people – so this final project fell well with that.

Chairman of Nottinghamshire County Council Sue Saddington said: “It was interesting to see the different types of exhibits which the students must of taken months to complete.  They showed their creative skills in many areas.  They were enthusiastic showing their parents what they had imagined and created over the period of time.  I wish them all the best in the future”.

Steve McAlone, head of creative industries and digital technologies, said: “The Arts Fest end-of-year exhibitions always surprise
and amaze me. It’s here we see such vibrant and powerful examples of everything our creative students have learnt and their sheer passion and enthusiasm just pours out of each project.

“Each burgeoning new artist is different, with individual qualities and creative thought processes – all set for their new paths into employment, specialist art colleges, universities or their own innovative enterprises.
“To see them sharing their projects with family, friends and fellow learners was also very humbling.” ← Back to Business News