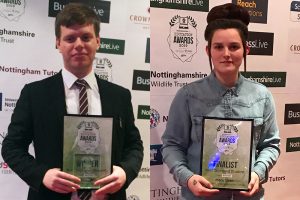 West Nottinghamshire College students Declan Mills and Macy Swan are celebrating success in the Nottinghamshire Live Education Awards 2019 – an annual celebration of outstanding students, teachers and support staff who have made a real difference or overcome adversity to succeed.

Hospitality student Declan won the ‘most improved student’ award, while sport student Macy was a runner-up in the same category – both for turning their lives around despite a difficult start to their time at college, and for making excellent progress in their studies.

This meant the college boasted two out of the final three contenders for this coveted award.

Hosted by BBC Radio Nottingham presenter Mark Dennison, the glittering awards – held at Crowne Plaza Nottingham on Wednesday 11 December – commended the achievements of stand-out students and staff across 13 categories. Now in their sixth year, the awards – run by the online platform of the Nottingham Post – were judged by a panel of expert judges.

Just two years ago, college staff were so concerned about Declan’s challenging behaviour, he was on the verge of being excluded and the decision was made to employ a temporary security guard. Declan, who has ASD and ADHD, was studying for a level one diploma in hospitality and catering when tutors decided to give him “one last chance”, removing him from his peers to ensure he completed his course.

The ultimatum worked. Declan has now made amazing progress, winning a departmental award and going on to study for a level three diploma in hospitality, supervision and leadership.

He also receives glowing reviews for his customer engagement at the college’s commercial restaurant, Refined, with tutors describing him as a “great role model and a credit to himself.”

Declan, 19, was nominated by head of foundation studies, hospitality, travel and animal care Helen Wilcockson and programme area leader Jo Wilson, who joined him at the awards ceremony.

Helen said: “We were incredibly proud to see Declan receive his award. Watching him progress over the last three-and-a-half years, he’s changed from being a student who was very difficult to manage, with a lot of challenging issues, to becoming a fantastic, determined, hard-working and very customer-focused student who contributes to our success as a department.

“This award represents how far Declan has progressed, and how much he has changed to become a young man with industry-level skills, who can go straight into employment – and I would employ Declan at a moment’s notice.

“I get satisfaction from seeing all students progress but seeing the turnaround in students like Declan is wonderful.

“I put a lot of it down to the dedication of the teams that have worked alongside him over the years, from additional learning support, the catering team, and particularly front-of-house staff – but most of all, it’s down to Declan.

“Declan wants to work in the hotel industry and has high aspirations, and was very excited that he had won the award.

“It was a fabulous evening, attended by lots of young people and teachers that deserved to win their awards for all their hard work.”

Macy, 18, was nominated by her sport and coaching tutor Rachael Evans, who was there to see her receive her runner-up accolade.

Macy’s experiences of secondary education were never good, with a series of exclusions and unsuccessful school moves which authorities put down to her desire to be the “class clown” – all of which left her struggling to see the point of turning up for lessons.

She started studying for a BTEC in sport and active leisure at the college in 2017, largely to give her “something to do,” but has since transformed her mind-set and attitude and is now in her third year, progressing to a level three diploma in school sport and PE.

Tutors say the teenager has matured beyond recognition, asking for extra work and learning to love studying, having realised that her whole future depends on her own actions and what she does, not on what other people think.

Rachael said: “It was a privilege to join Macy at the awards ceremony as a finalist for most improved student, considering where she’s come from in terms of her school days and also some of the issues she has had at college.

“Macy and her mum, who also attended, were really proud and perhaps thought that a moment like that would never come. It was quite emotional to reflect on the journey she has been on and where she has got herself to, and Macy is deservedly proud of herself for that.

“She has had to make some pretty big changes, and I’ve tried to help guide her along the way. The fact she has been recognised in this way is testament to what she has achieved.

“Macy loves helping people and she’s a great asset in class, helping other students, and I think long-term she would be a brilliant mentor for people who’ve been in a similar situations, to help them develop and see that anything is possible if you have the right support and the right mind-set.

“She is already quite motivated and wants to do well, so being chosen as a finalist will hopefully show her that she has loads of potential and give her added motivation.”