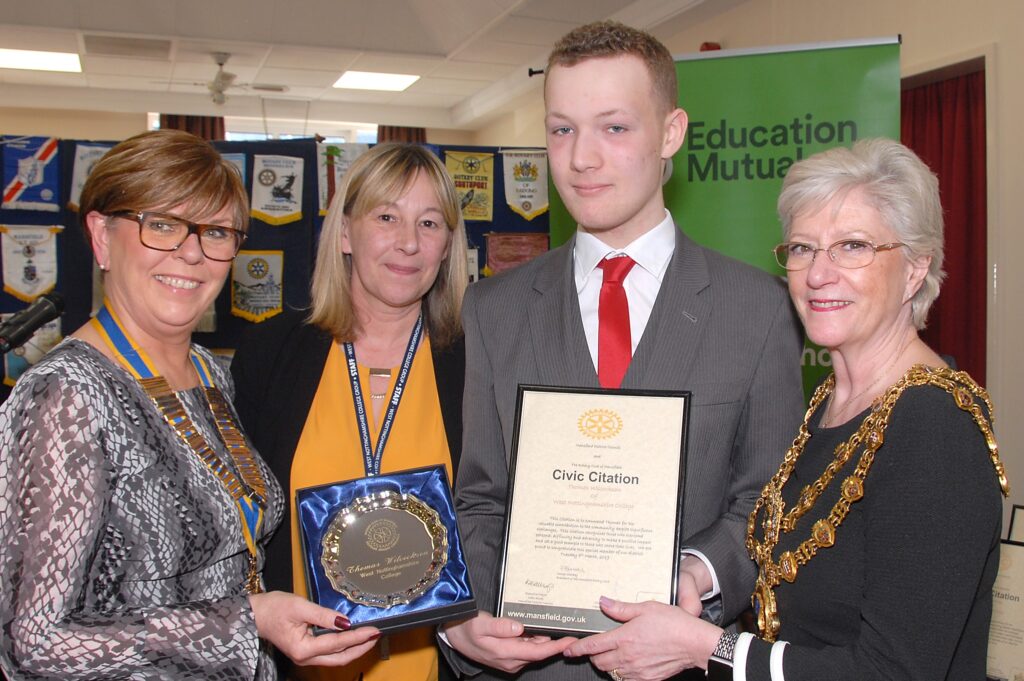 A brave and determined computer science student at West Nottinghamshire College has been honoured at an annual celebration of Mansfield’s most courageous youngsters.

Thomas Wilcockson was one of 12 inspirational children and young people from schools, colleges and education-providers across the district commended at the Rotary Club of Mansfield’s 28th Courage Awards.

They were presented with engraved trophies and certificates in front of more than 100 guests including dignitaries, Rotarians, sponsors, proud family members and carers, who heard moving tributes from teachers and tutors, at a lunchtime ceremony at Portland College, Mansfield, earlier this week (Tuesday 5 March 2019).

Eighteen-year-old Thomas was nominated by computer science curriculum manager Trudi Dean for being an “inspiration to us all” for his dedication to his studies as he battled leukaemia.

The teenager joined the college in 2016, studying the Level 2 Diploma in IT (Software and System Support), which he achieved with 100% attendance and a distinction star grade. The following September he enrolled on the OCR Level 3 Technical Foundation Diploma in IT, studying a pathway in application development, with ambitions of becoming a video games developer.

However, in January 2018 Thomas became extremely unwell and, following a bone marrow biopsy, he was diagnosed with leukaemia. He was soon attending hospital for various tests and treatments including chemotherapy.

Trudi said: “Despite this, Thomas was eager to continue his studies from home and hospital via distance learning, and lots of emails to tutors; one of which was asking them to respond as soon as possible because, as Thomas wrote, he was ‘planning to work on my assignments Monday to Wednesday and then have my treatments on Thursday, allowing time for recuperation in between’.

“For a time, Thomas’s parents Chris and Lisa thought he may be well enough to sit his second exam in May. Unfortunately, Thomas became very ill at that time and required further treatment, and hospitalisation for blood transfusions.

“Even at this point, Thomas made it very clear that although it now looked unlikely that he would complete his course, he fully intended to return in September to be able to complete the qualification he had started.

“Regrettably, it was not to be, as in September Thomas underwent a bone marrow transplant which meant he had to have a period of isolation for recovery.

“Thomas finally returned to college on 10 December 2018, three months after his peer group. Through sheer determination, Thomas has now caught up on all work missed, sat the missing exam and is well on track to achieve the qualification in June, despite still attending regular hospital appointments.”

Thomas also has Asperger’s, which meant he struggled at school because he finds it difficult to socialise. But since coming West Notts, Trudi says he has “really excelled and found his place.”

She said: “Thomas’s focus and dedication towards his studies is an excellent example to any student; showing that you can overcome some of life’s most challenging experiences if you are dedicated to achieving your goals. Thomas truly is an inspiration to us all.”

Attending the ceremony to see Thomas collect his award were proud parents Lisa and Chris.

Chris said: “Thomas was first to receive an award and the introduction that was given by Trudi was wonderfully moving, leaving us both emotional and beaming with pride as we heard everything that Thomas had gone through being acknowledged by someone that had helped us all so much over the last year and more.

“As the awards moved on and we got to hear all the other individuals’ stories, we realised that there are so many brave young people out there, each fighting their own battles, and each clearly deserving of the recognition and awards that were being given to them.

“It was a very humbling afternoon and we feel very honoured to have been a part of it. Thomas really enjoyed himself in what was a very friendly and welcoming atmosphere.

“This was a day we will all remember for a very long time.”

Trudi added: “Hearing all the individual stories makes you realise the part that education plays in making these young people so resilient and determined. It was very clear that what helped them the most was having a goal – in Thomas’s case, completing his course.

“Thomas is a fairly quiet and reserved student but seeing him walk up to the podium to collect his award with a beaming smile on his face was just magical. It was so fitting that Thomas received this accolade in recognition of the progress he’s made, not only in terms of his health but also in improving his communication skills, and for his dedication towards coming back to college.”

Revealing his own sense of pride, Thomas said: “I felt very proud to be nominated on behalf of the entire college and it was exciting to be the first person to go up and collect their award on the day.

“It was great hearing about everybody else receiving awards as well; some of them blind, some with disabilities and some with serious illnesses.

“I always wanted to come back to college. I really enjoyed my first year here and I really want to get a job in the field that I’ve chosen, as a games developer, so I did my college work in hospital and am managing to catch-up. I’m determined to get there.”