Don’t put it off – it may just save your life! 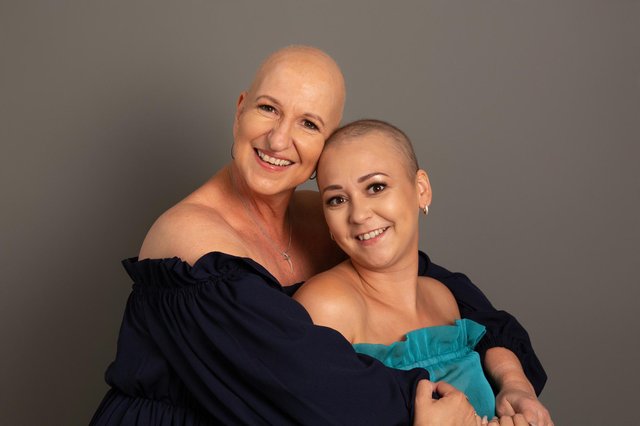 Two friends fighting breast cancer are urging people to get any health issues looked at before it is too late.
Julie Powell (55), of Warsop, and Bianca Markham (31), of Chesterfield, are both being treated at Chesterfield Royal Hospital.
On Wednesday, Bianca, a caterer, and a mum of two, underwent an operation to remove her right breast. Bridal consultant Julie, a mum and step mum, will undergo a lumpectomy on 21st July.
Both ladies, who met while attending their treatment at hospital, are urging people to get things checked out if they suspect a health issue, no matter how small it may seem now.
Bianca found a small lump under her breast last year and ignored it until it got more painful. She went to see her doctor, and then consultants, thinking it was just a cyst but, after tests, she was told she had breast cancer.
Following weeks of gruelling chemotherapy, she has now had her right breast removed, and will have her left breast removed later.
In January, Julie went for a routine mammogram, followed by further tests. It was discovered that she had stage three cancer, an aggressive form of cancer, even though there were no visible signs of any lumps.
She has undergone 18 weeks of chemotherapy and will also have to undertake weeks of radiotherapy, followed by years of medication.
Bianca said: “I was one of those people who thought nothing of it and just got on with things. It’s a bit surreal but this has been the toughest time of my life, and it has also affected my family and my boys.
“Please, if you find something, get it checked out. Do not leave it too late.”
Julie adds: “If there is anything even vaguely suspicious, get it checked out. You do have to have a positive mental attitude and we are both there to support other people who are going through similar situations.”
Since meeting, the friends have been in constant contact, and recently had a special makeover and photoshoot, with make-up by Ema Brown, of Mansfield Woodhouse, and photographs by Elizabeth Orridge, whose studio is in Mansfield.
Elizabeth said: “The spirit and positivity shown by these two beautiful friends is simply inspirational. They are fighting their own battles but are supporting each other and other people who are going through their own tough times.”