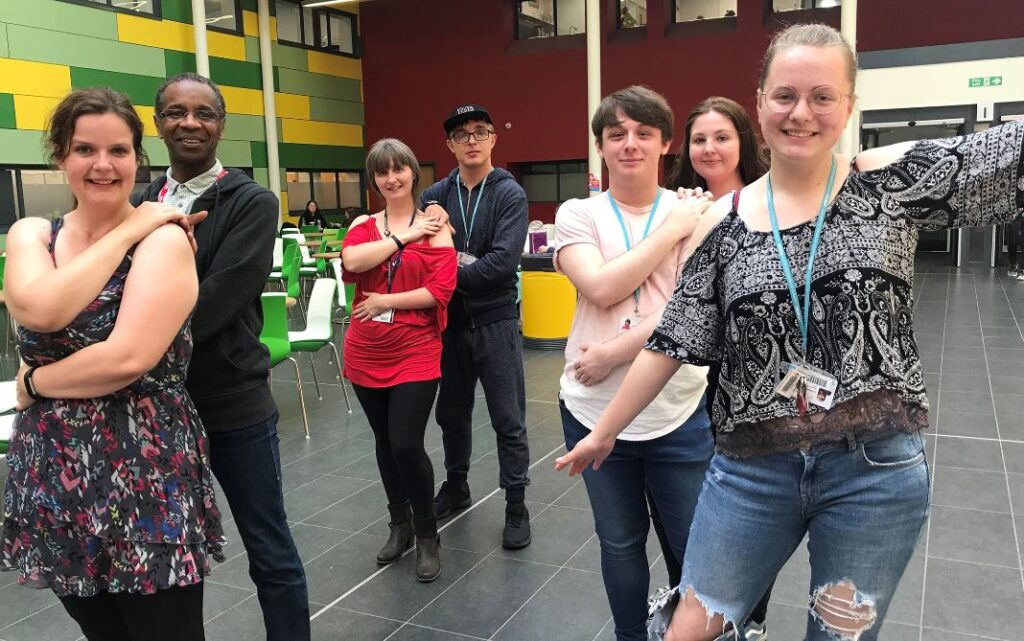 Staff and students at West Nottinghamshire College performed an end-of-term ‘flash mob’ to a West Coast Swing dance routine – with the aim of raising awareness of mental health.

The idea was the brainchild of English tutor and amateur dancer Charlotte Marshall, whose brother David tragically took his own life in 2017.

Since then she’s been determined to shine a spotlight on mental health and emotional wellbeing, in particular the importance of talking about it and offering people a chance to open up about their struggles.

Each year people across the globe take part in the International West Coast Swing Flash Mob, or rally. This year’s international event takes places on 7 September, which would have been David’s 35th birthday.

The poignancy of this inspired Charlotte to organise a small-scale version of her own, before students finished their studies for the summer, as a novel way of bringing focus to the issue.

Charlotte, who says dance is the “best medicine”, explained: “In recent years there’s been a lot more discussion around mental health – yet it’s still a subject that people can find awkward to raise.

“How I wished I’d noticed something was wrong with David and been able to reach out to him. It would have been a difficult and nerve-wracking conversation but potentially life-saving. He was somebody who I admired, respected and looked up to, yet he felt he didn’t have a way out.

“As a teacher, I do my best to facilitate positive engagement with students around mental health to help counter the negative aspects. I’ve never shied away from talking to them about David.

“My group openly discusses the wider topic in a very natural way. Their attitude to mental health is amazing. It’s really important that people talk about it openly, which will normalise the fact we will all have difficult times and experience mental pressure.

“The idea of the flash mob was to get people talking. We’ve had loads of positive comments such as ‘you’re very brave to do that.’

“It’s even braver to have a conversation with someone about their mental health when you notice they may be struggling. You can’t fight another person’s battles but you can let them know they’re not alone; that they’ve been noticed.

“For people struggling with their own mental health, I truly hope you find a person to confide in and get some support. For those too nervous to ask the difficult questions, I hope you will be brave and face it.”

Praising her fellow dancers, who performed the flash mob on Thursday 20 June, Charlotte said: “They had the chance to practise the routine for just one hour, whereas most dancers doing the International West Coast Swing Flash Mob rehearse over four hours’ worth of workshops!

“It was a big ask and yet they did a really good job. Despite some understandable nerves, they got past the initial awkwardness to do something amazing.”