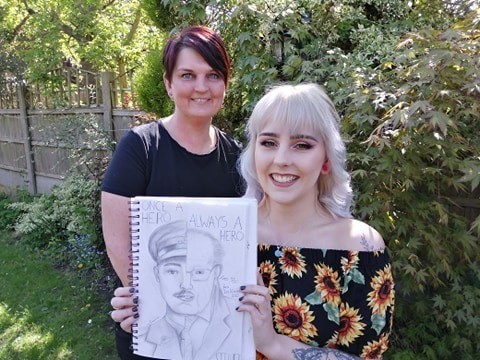 A former art and design student from West Nottinghamshire College has taken her skills far and wide during lockdown, while saluting one of the nation’s heroes – Captain Tom Moore.
Ella Williamson, from Mansfield Woodhouse, has made social media headlines with her pencil drawing of the now famous Captain Tom Moore, the 99-year-old veteran who is winning hearts all over the world with his multi-million pound fundraising mission.
Ella’s drawing shows two sides of the former British army officer, who served in the Burma campaign and the Second World War. The left side shows him as a young man dressed in his military uniform and the right side shows him as he is today, with his war medals proudly displayed on his jacket.

Ella said: “I did a lot of research on Captain Tom and found plenty of images of him online from his younger years in the army. I was so inspired by him and I love getting on with a project and putting my own style into things, so I decided to draw the two sides to his life. Knowing that he fought in the war and that war is a traumatic experience, I wanted to honour this hero. Every soldier who fights in battle is a hero to us all.”

Mum Tami was justifiably proud and shared her 19-year-old daughter’s drawing on her Facebook page, which to date has seen over 2,000 likes and 5,000 shares.

Tami said: “I’m unbelievably proud of Ella. She works so hard on her artwork and never gets much recognition. I’m so glad she’s finally getting the attention she deserves. We’ve discovered that Tom’s family have seen the drawing on Facebook as well which is really exciting!”

Ella completed the BTEC Level 3 Extended Diploma in Art and Design last year. She particularly loved print and textiles and learning new things in the art industry. After college she began work in a local restaurant, but still continues to sketch and paint on the side. She now works as a key retail worker in her village’s Morrison’s supermarket.
And her popular sketch isn’t going to sit still either, as she has plans for it to go to a very special person – Captain Tom himself.

She added: “It’s his 100th birthday on 30 April so I am going to send him a birthday card along with my drawing. I do hope he likes it!”

Captain Tom has since joined singer Michael Ball and the NHS Voices of Care Choir to record a charity single “You’ll Never Walk Alone”, which has gone to number one in the charts already.
It’s all part of the Just Giving fundraising campaign which will see Captain Tom walk 100 lengths of his garden before he turns 100-years-old.
The Just Giving link can be found at https://www.justgiving.com/fundraising/tomswalkforthenhs