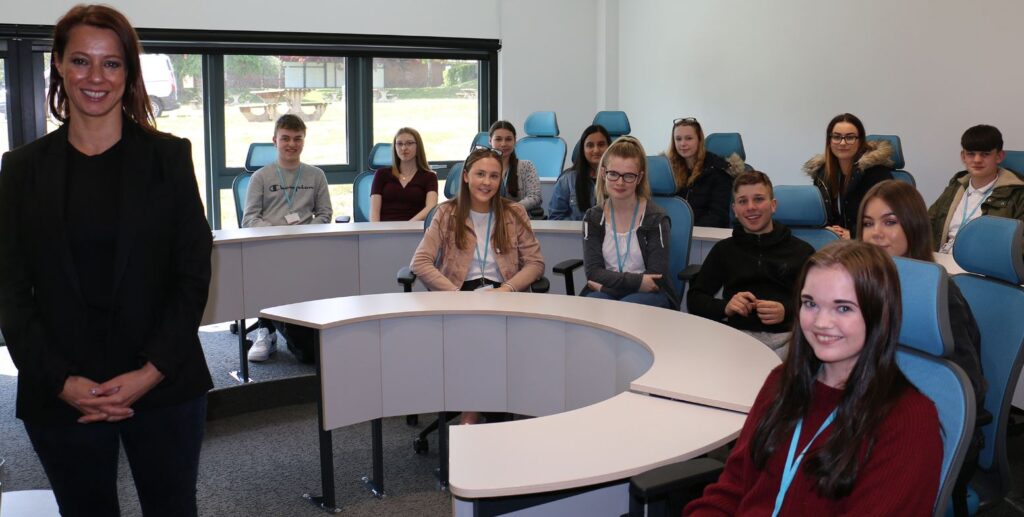 A-level students at West Nottinghamshire College enjoyed a lively political debate with Ashfield MP Gloria De Piero – quizzing her on everything from Brexit to HS2.

It came as part of a question-and-answer session with the Labour MP and Shadow Justice Minister, conducted by first-year students as part of their politics and sociology courses at the college, which has campuses in Mansfield, Kirby-in-Ashfield and Sutton-in-Ashfield.

Visiting the college last week (Friday 17 May), Ms De Piero began with a revealing insight into her work as a local MP, including her engagement with the local community and her role in the shadow government in Westminster.

She then answered a series of questions on issues ranging from Brexit, taxation and the minimum wage, to Labour Party leadership, the nature of party political support, fracking, and the proposed high-speed rail network.

The one-time television journalist and GMTV political editor, who has represented Ashfield since 2010, described the role of MP as “the most fulfilling job I have ever had”, although admitted to finding it “frustrating” it had been spent in opposition.

Explaining how she engages with the community, Ms De Piero insisted: “There is no better way of knowing what is happening in this country than by knocking on doors and speaking to people.”

Freje Nadin-Hamilton, 17, from Mansfield Woodhouse, who studies history, politics and sociology, said: “I found it really interesting and beneficial for all my courses. Because the subjects inter-link with one another, I’ll be able to apply the knowledge I’ve gained to all my work.

“It’s good to get different political viewpoints and hear from different parties. Learning about the issues that affect our communities will broaden our knowledge and give us a greater insight into what we’re voting for when we’re old enough to vote.”

Sociology, media and law student Luca Sheldon, 16, from Warsop, said: “Activities like this are important because we are the voters of tomorrow. Gloria did a very good job of answering everyone’s questions. She didn’t try to steer us one way or the other, she just explained her point of view as respectfully and as fairly as possible. It was very educational.”

Ms De Piero said: “The students really put me through my paces and it was great to see so many of them are so politically-engaged. We had some good debate and I was very impressed with the range of topics that they questioned me on.”

Sociology and politics tutor Stuart Booker said: “I was very impressed with Gloria’s engagement with the students and her understanding of the issues important to their lives. She discussed with them their concerns about local and wider society issues.

“The students asked some challenging questions and Gloria’s answers provided a valuable insight into the workings of Parliament and the nature of political parties. It was a terrific event and one that the students, many of whom are interested in a future career in politics, will remember for a long time.”