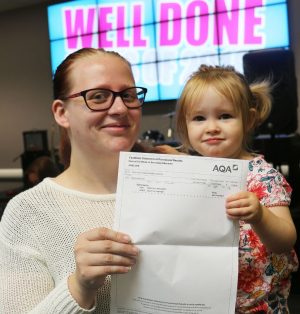 A total of 1,517 exams were sat across the three GCSE subjects offered at the college, producing the following pass rates:

There were 1,145 students that studied GCSEs at the college this year (2017/18), largely due to the government’s requirement for young people aged 16-18 that do not have a grade C or above in English and maths – grade 4 under the revised system – to re-take these subjects while in post-16 education.

The majority re-sat English or maths alongside their main programme of academic or vocational study. However, the college also has many adult learners who attend evening classes to gain GCSE qualifications they missed out on at school – usually to progress to higher-level study so they can re-train for a new career.

English, maths and science were examined under the government’s revised GCSE grading system being phased-in by 2020. These subjects are now graded numerically, from 9-1, instead of the A*-G letter system. Grade 9 is the highest that can be achieved under the new system, set above A*. Grade 4 is a ‘standard pass’ broadly equivalent to a C grade, while grade 5 is considered a ‘strong pass’.

The number of students that either met or exceeded their target grade increased by 7.9% in English and 5% in maths.

Principal and chief executive Dame Asha Khemka said: “GCSEs remain one of the most important qualifications anybody can achieve. Not only do you need these to progress to higher-level study, they also open up new career opportunities. Some universities even ask for specific subjects and grades – so GCSEs really are a big deal.

“Regardless of whether they’ve combined GCSEs with their main academic or vocational course, have returned to education as an adult with a new job in mind or studied purely for enjoyment, our students should feel really proud of what they’ve achieved.

“Moreover, they can be confident they now have the qualifications to take the next step towards fulfilling their ambitions.

“Huge congratulations to every student for their dedication over the last year and to their tutors and mentors who have taught and guided them.” 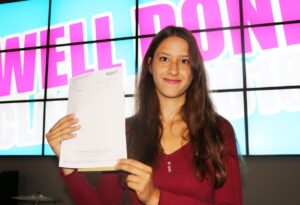 Nineteen-year-old Maria Tomova is celebrating after achieving a grade 5 in GCSE maths.
Maria moved to the UK four years ago from her homeland of Bulgaria. After discovering her secondary school grades from Bulgaria wouldn’t count in the UK, she came to West Nottinghamshire College to study GCSE maths alongside A-levels in biology, psychology and the extended project qualification (EPQ) – achieving A, B, B respectively in these last week.

Maria, who now lives in Mansfield, said: “Originally I got a grade C in maths, but because I need the equivalent of a B grade to get in to my first-choice university, the University of Nottingham, I re-took it. I’m so happy to get a grade 5 as this means I can now study a bachelor’s degree in psychology. After that, I’ll study a master’s degree in industry organisational psychology.

“Because I studied A-levels alongside the GCSE it’s meant a lot of concentration. Originally I studied in a group but it became too easy to be distracted so I studied alone, and I really concentrated on time-management.

“I also have a part-time job and I volunteer at King’s Mill Hospital so I’ve been very busy! It’s been a long week waiting for my maths grade after collecting my A-level results but I’m really pleased with the outcome.

“I can’t wait to go to university and begin the path towards my career in industry organisational psychology, which involves helping people within an organisation to achieve their best potential.” 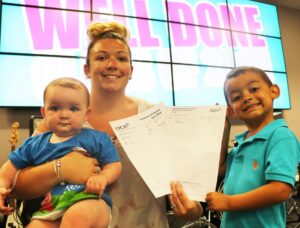 Achieving grade 5s in maths and science means mother-of-two Stephanie Walsh, 33, is on the way to fulfilling her dream of becoming a primary school teacher.

And she did it the hard way, combining her GCSE studies with her main college course – the Access to Teacher Training – while also raising her children, 14-month-old daughter Sofia and four-year-old son Noah, and recovering from an injury.

Last October, Stephanie broke her ankle tripping over, which left her in a wheelchair for four months. Despite her injury she continue to attend lessons – and is now reaping the rewards.

She said: “Now that I’ve passed my courses I’m about to start a PGCE (Post-Graduate Certificate in Education) in September through the local primary school where I’ll be working as a trainee teacher, in conjunction with the University of Hull.

“My ambition is to become a primary school teacher but to do that you need to pass your science and maths GCSEs. So these grades have confirmed my place on the PGCSE course.

“It’s been a struggle, especially with breaking my ankle and having two small children to look after, and although there were times when I could’ve given up, I continued with all my studies because I knew I had to go through with it.

“At school I got Ds in science and maths, so to better those results feels fantastic.”

Improving his English language GCSE by four grades – from a 2 to a 6 – has given Michael McCann, from Mansfield, reason to celebrate. 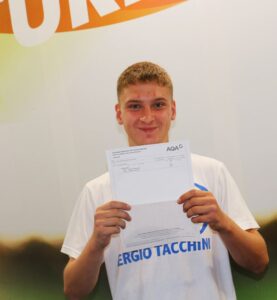 The 17-year-old, from Mansfield, re-took English language while studying the Level 2 Electrical Electrotechnical Technology course at the college.

He said: “I wanted to improve on the grade 2 I got at school, where I didn’t have the best experience, but this time I’ve felt so supported in class. My tutor made lessons so interesting and different that I looked forward to going to them.

“Getting a grade 6 is brilliant. I’m going for a new challenge this year as I’d like to study business and accounting. My dad owns his own business so I want to pursue this too. I think you’ve got to be hard-working, confident and focussed and I’ve seen that in dad. I think I can be the same and I’m just going to go for it.” 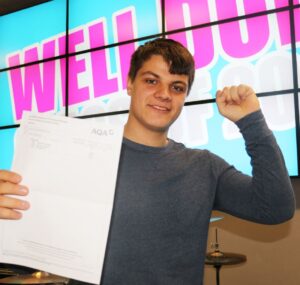 Aleksas Stepanovas, 19, of Mansfield Woodhouse, was delighted after gaining grade 4s in English and maths.

The 19-year-old, who moved to the UK from Lithuania four years ago, re-took these two GCSEs while also studying the BTEC Level 2 Diploma in Business, which he passed in the summer with a merit grade.

“I needed the English and maths qualifications to get on to the Access to Higher Education course, which I’ll be studying from September at the college, in the University Centre building,” said Aleksas.

“After this, I will go to university to study economics. My ultimate goal is to own my own business.

“I was very nervous collecting my results. All summer I was thinking about my GCSEs and now I’ve seen the results I’m very happy indeed. I’ve worked very hard throughout my courses and didn’t miss any lessons – my attendance and punctuality were both 100% – and I did all the papers that my tutors gave me.

“I’m very happy with my grades.”

Christina Bilton, 48, from Mansfield, returned to education after a 30-year break – and is delighted with her decision after gaining a grade 7 in English and grade 5 in maths. 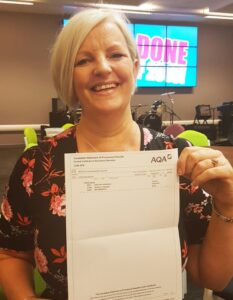 She said: “I came to college later in life because I was made redundant after working in accounts for 25 years, and then from another couple of jobs that I did afterwards. As I was applying for new jobs I realised I needed the equivalent of C grades in these subjects.

“I knew my English was reasonably good but I never really took to maths at school – although as an adult, it just clicked. I thought I’d maybe get a grade 4 in maths so I’m very pleased to have got a 5. I was hoping to get a high grade in English because I’d worked really hard, but I didn’t expect to get a 7!

“It was hard studying after 30 years but once I started on the English course I realised how much I enjoyed writing, so now I’d like to try to write books. This has given me the passion.

“I am looking at maybe going into an administration role and writing as a hobby, but I’ll wait and see where the path takes me.”

A nervous Melissa Eglin, 28, from Stanton Hill in Sutton-in-Ashfield, collected her results with her toddler Olivia. Her worried expression soon turned to joy as she achieved a grade 6 in GCSE English after expecting a 4.

Melissa, who also studied Access to Teacher Training at the college, said: “This is great because it means I can now go to Bishop Grosseteste University in Lincoln to study an honours degree in primary teaching studies with qualified teacher status. My goal is to work as a primary school teacher.

“At school I got a D in English and then moved to France, where I ended up working in horticulture, but I always had the desire to teach.

“To get on to the university programme I needed equivalent to a C grade in English plus 112 UCAS points and the access to HE qualification that I’ve just studied. I’ve been panicking all summer because I didn’t think I’d done enough to get the grade, but I can breathe a sigh of relief now!”

Another relieved student was Cameron Rogers, 17, from Mansfield Woodhouse, who achieved a grade 4 in maths after re-taking the subject at college alongside his main 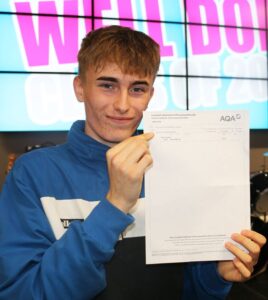 Cameron said: “I got a grade 3 in maths at school because I had a lot of time off in Year 10 with health problems, which meant I had too much catching-up to do in Year 11. When everyone else was revising I was still learning.

“Even though I didn’t pass first time, I’ve now achieved it second time around. I’ve worked hard at college to get better at the subject. I didn’t want to open my results envelope because I was worried about whether I’d passed or failed, so this is a great feeling.

“It means I can really focus on the Level 2 Motor Vehicle course, which I’m progressing on to when I return to college in September, and put all my effort into that. I want to work as a vehicle technician so passing GCSE maths is helpful for things you have to do in the workshop. Now I’ve got the qualification it’ll make it easier for me.”