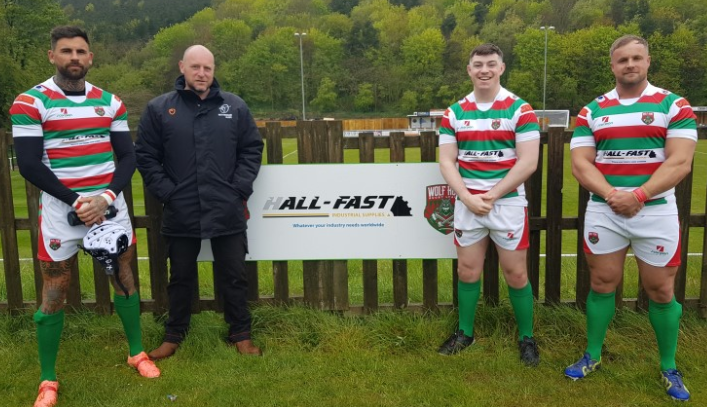 Sherwood Wolf Hunt are delighted to announce an extended partnership with Mansfield based industrial supplies giant Hall-Fast. The new partnership will see Hall-Fast feature front and centre on the club’s open age playing shirts, as well as on the Junior and Women’s team kits for 2021 and 2022.
Hall-Fast are no strangers at the Debdale Park club, having first supported the growth of the Junior Hunters programme in 2019. impressed at the ambition of the club they’ve now committed to supporting and helping the club to grow further in North Nottinghamshire.
Club Chairman Adam Bates said “We’re very proud to be working with very well respected Mansfield businesses such as Hall-Fast. The support from Malk and Rachel (Hall) has been fantastic, and extends way beyond sponsorship of kit and equipment. Their passion for developing grass roots sports is like nothing i’ve seen before and we’re made up that they’ve joined our mission to develop the sport of rugby league at Debdale Park.”
Hall-Fast Managing Director Malk Hall said “I’ve been very impressed with what the Wolf Hunt have done both on and off the pitch, Hall-Fast support numerous community based initiatives and I want to help Adam and his team and be part of the growth of the club from Little Ruggers and the Junior Hunters through to the Men and Women’s senior teams”
Wolf Hunt join a long list of sports teams that have been supported by Hall-Fast’s community support initiatives which include Nottingham Rugby, Paviors Rugby, and Mansfield Town to name a few.
Hall-Fast was founded in August 2006 and has become one of the regions fastest growing companies, and one of the most successful in its sector. They boast a range of 175,000-plus products, including leading brands such as Karcher, Helly Hansen, Snickers and Scruffs.