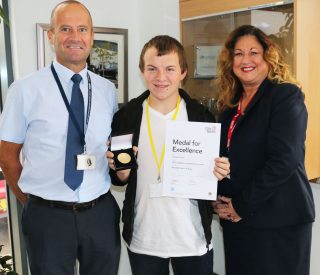 A joinery student from West Nottinghamshire College has been awarded a highly-prized City & Guilds Medal of Excellence.

Jordan Harrison, 19, from Sutton-in-Ashfield is the only student within Nottinghamshire and Derbyshire to achieve this accolade and one of just 86 people in the world to hold the prestigious golden medal this year – and has scooped a prestigious Lion Award.

The Medals for Excellence have been awarded by City & Guilds for more than 100 years to lecturers, students and trainers who have shown exceptional dedication to their learning and development.

Areas of craft and study which are rewarded with the Medal for Excellence include many trades including drapers, goldsmiths, ironmongers, coopers, carpenters, plasterers and many more. Hundreds of nominations are made every year both in the UK and abroad.

Jordan’s tutor and carpentry programme area leader, Andy Whyley, nominated Jordan last academic year for his absolute commitment to his studies and how he has progressed.

Andy said: “From day one on his Level 1 joinery course, Jordan has shown initiative and determined progression. Due to a few health problems, Jordan was supported by the college’s additional learning support team. By the time he reached his second year he decided he felt ready to cope without this extra support and has done this very well.

“He’s definitely gone from strength to strength, putting in so much effort and always putting himself forward for internal and external trade competitions. He’s a real credit to the college, his employers and his family.”

Jordan has returned to college to continue studying and is now on the BTEC in Construction and the Built Environment.

Collecting his medal from Debs Wray today, he said: “It’s amazing as there are so many students at West Notts and yet I’ve been selected to receive a Medal of Excellence – it’s brilliant.

“I’m grateful to Andy and all the staff who have helped me such a lot. It’s such a good feeling, and to know I’m one of 86 in the world too, to get this medal is great.

“I’ve loved life at college right from day one. I’ve always wanted to come and I love being here bright and early!”

Debs Wray said: “It’s always a pleasure to present Medals of Excellence and Jordan is a tough act to follow.  On the back of this award, he’s also been put forward to win a Lion Award, another City & Guilds nationally-recognised award. In January he and his tutors will be invited to London to the awards ceremony where he will receive the Lion medal.”

“I’d like to wish him the best of luck with his future studies and employment and these awards recognise his achievements, how he’s thriving with his studies and how capable he is.”

More about City & Guilds’ Medal of Excellence and Lion Awards

As a world leader in global skills development, City & Guilds wants to inspire people to believe in themselves and unlock their potential. We believe learning has no limits, and that’s why it’s important to celebrate outstanding achievements.
For over 100 years, the annual City & Guilds Medals for Excellence programme has been run to recognise success amongst learners and tutors. This year we have awarded over 85 Medals for Excellence both in the UK and internationally.
The City & Guilds Medal for Excellence is a distinguished work of art whose design has remained largely unchanged since 1880.
One side bears the City & Guilds Award Seal. The seal consists of the Coat of Arms of the Corporation of the City of London in the centre, surrounded by the Coats of Arms of the 16 Livery Companies who were the original founders of City & Guilds, in two consecutive circles.
As well as being awarded with a medal, each medal winner is in the running to win one of the coveted Lion Award trophies. The Lion Awards event – City & Guilds’ most prestigious awards ceremony – acknowledges the best of the best in a range of categories including our centres. Once the Medals have been awarded, a judging panel sits down to consider who they would like to nominate for a Lion Award. The winners will be announced at the Lion Awards event and will find themselves going home with their very own Lion Award trophy.