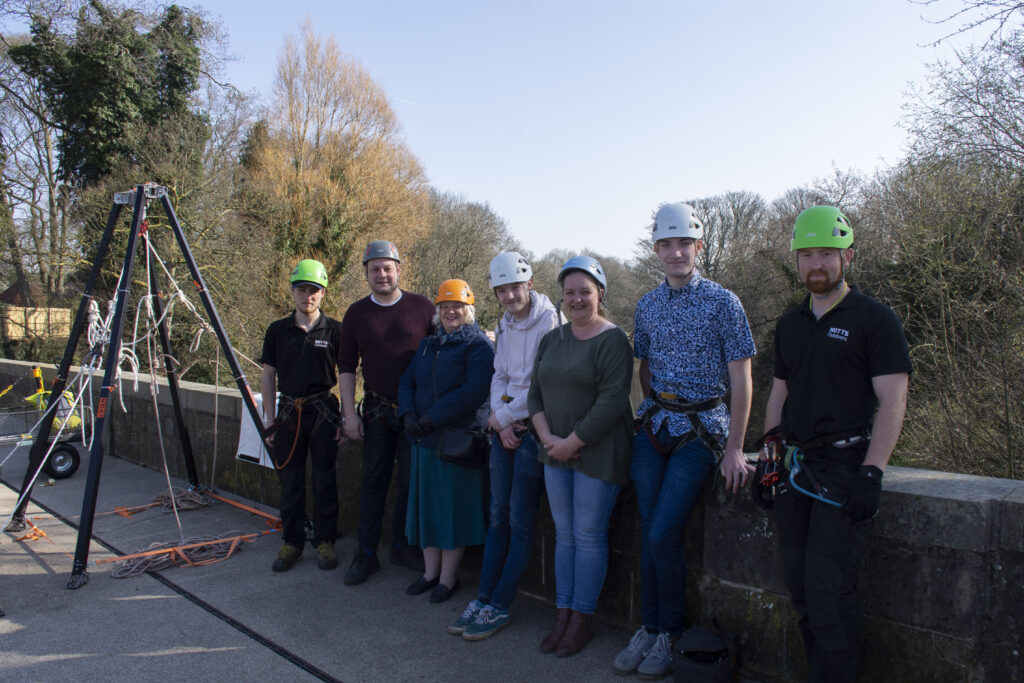 Conservation works to Kings Mill Viaduct have given an old bridge a new life – including dangling brave abseilers over its highest point!

For the very first time, the public were invited to abseil over the viaduct, as part of National Lottery Open Week. A fantastic time was had by all those who came to abseil or to enjoy watching the adventurous ones as they descended towards the pond! The activity was run by Notts Outdoors for the Mill Waters Project – which receives funding from the National Heritage Lottery.

Improvements have also been made to the surface of the viaduct, providing pleasant access over it and helping passers-by get closer to the stunning view over Hermitage Pond and the heronry. If you’re lucky a heron might swoop by to say hello!

Kings Mill Viaduct (originally known as Portland Viaduct) is one of the oldest in the country, it was built for the Mansfield & Pinxton Railway, which opened on Easter Tuesday, 13th April 1819. For the first 30 years wagons and carriages were pulled by horses. The transition to steam on the original Mansfield to Pinxton line didn’t take place until 1849.

These days you are more likely to see an abseil line than a railway line, as Notts Outdoors make great use of the viaduct for willing adventurers

Cllr Jason Zadrozny said “It is fantastic the viaduct has not only received restoration work but is now being used for new activities. I jumped at the chance of abseiling off the side, and I hope that everyone that had a go had as much fun as I did.

“As part of the Mill Waters project Kings Mill Reservoir and Sutton Lawn have received restoration and improvement works. This has been helped by the national Heritage Lottery funding, and it is great that lottery players had the opportunity to take advantage of the free abseiling event.”

Drew Cartwright, Manager of the Mill Adventure Base at Notts Outdoors said “Notts Outdoors are proud to have worked with our partners to deliver this exciting activity. Abseiling from such an iconic and historical structure in the local area helps the local community connect with its vibrant heritage whilst getting fit, learning new skills, and having fun.

“The activity is just one of the many attractions that draws people to the Mill Adventure Base and the wider country park where visitors can experience and learn more about the areas proud past and its ambitious plans for the future such as the Mill Waters project.”

Cllr Andy Burgin, Portfolio Holder for Environment and Leisure at Mansfield District Council, said: “This is such important railway heritage monument nationally that it is fantastic to make this place more accessible to everyone with these improvement works.

“Both the King’s Mill Reservoir and Mill Adventure Base are great leisure assets for both Mansfield and Ashfield residents to enjoy, and with the Timberland Trail connecting open spaces and local nature reserves in Mansfield to Ashfield along this old railway line, I would encourage local people to get out and explore this place of natural beauty on their doorsteps.”