Learners get to grips with biology during ‘The Post-Mortem Live’

While their home studies have been alive and well, students from West Nottinghamshire College enhanced their science skills looking at how death affects the body and its organs.
Students on applied science, health and social care, and sports science courses at the Mansfield college tuned-in to watch nationally-acclaimed human anatomist Samuel Piri and his clinical team working on a real organ-dissection experience during an actual post-mortem.
Over the period of one week, classes viewed the five-part internet series The Post-Mortem Live, which covered different areas of the body. A general autopsy first looked at what can be seen from the body on the outside after death.
On day two, students were able to learn more about the brain and how it works, as well as its links to the vascular system and the diseases which can affect brain health. Anatomists showed how brains from different animals differ in size but have common features. The lesson also featured scans of human brains to demonstrate blood flow and general structure as well as how a stroke or brain tumour would appear.
The complexities of the heart, its blood-flow system and how the vessels and valves work were looked at on day three, using a pig’s heart as an example. 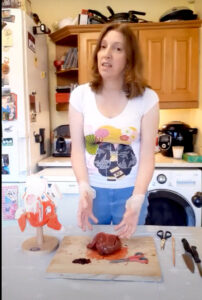 The groups looked at the workings of the lungs using a pig carcass to demonstrate where they sit and how the voice box, trachea and bronchioles lead into the lungs. The anatomists demonstrated how artificial ventilation would have to occur for Covid-19 patients. They discussed how pressure-changes occur in the lungs as the diaphragm and rib cage work together to change volume, which affects blood pressure.
Finally, the digestive system was explored and the liver, pancreas, stomach and small and large intestines were discussed.
Biology tutor Melanie Pykett, who organised the groups taking part in the online learning, also filmed herself performing and discussing the dissection of a cow’s heart from her own kitchen as an additional feature for the week. In this video she was able to show close-up shots of the chambers of the heart.
Melanie said: “This was a really unique opportunity for students across the college to learn using a different approach to being in the classroom. They were able to send questions through to the presenters and then took part in group activities with their peers to discuss what they had learned. All the different methods used by a pathologist were discussed.
“Our applied science students will be able to apply this knowledge to their Crime Scene to Court (Forensics) module, which they will study in the next academic year.”
BTEC National Extended Diploma in Science (Forensic Science) student Anjeli Amarasinghe Vithanage, 18, said: “I really enjoyed The Post-Mortem Live, which has provided me with an incredible way to learn about the human anatomy, physiology and pathology, especially during this time when students aren’t able to come to college.”