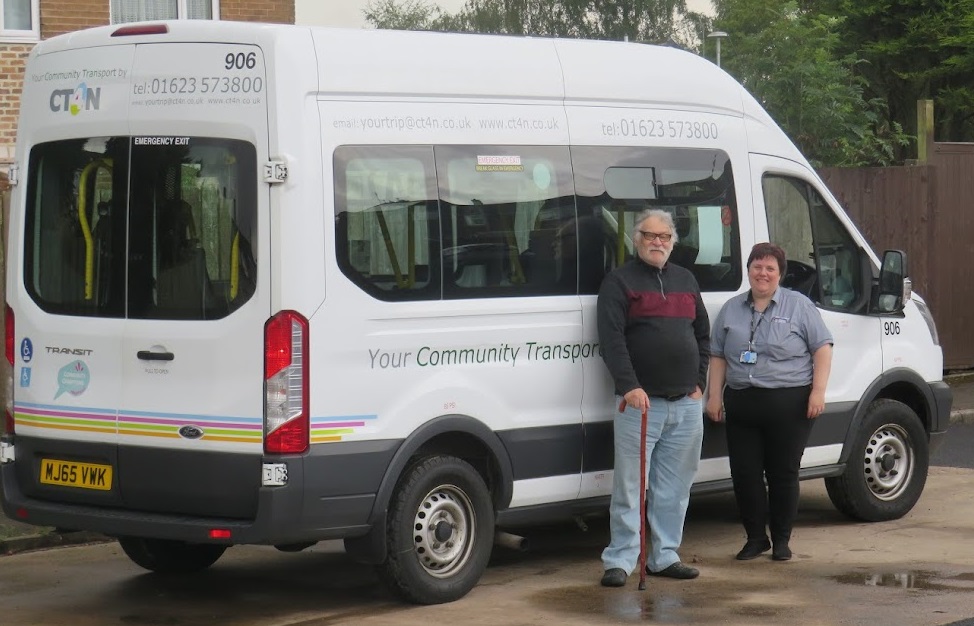 A local Mansfield resident is urging as many elderly and disabled residents in the area to complete a survey and have their say, to help a community transport operator develop plans to improve transport in the area following the success of a pilot project.
Paul Allen, 67, from the Bellamy Road Estate has used the service, which was funded as part of the Community Champions Project, to get to and from appointments and now wants the service to continue, to help more people travel around Mansfield. “I suffer from a number of health issues which makes moving around very difficult, so this service has been a lifeline to me.” said Paul.
According to the Government’s own measures, Mansfield has significant levels of deprivation and more than half of the areas within Mansfield are among the top 30% most deprived in England with ten of its areas falling within the top 10% of the whole of England. Non-profit community transport services have been proven to assist in the regeneration of deprived areas, increasing levels of accessibility and community cohesion, and aiding the work of local voluntary and community organisations.
“We are seeking views from anyone in the area who would like to see improvements to transport” said Managing Director Ian Combellack. “In particular, we’re keen to hear from the elderly, people with disabilities, as well as community and voluntary groups.”
The survey is being organised by CT4N Charitable Trust – a local charity that specialises in providing transport for older people and those with disabilities. The charity has a local base at Mansfield Woodhouse and has been operating the pilot project since April.
Paul added “The staff are fantastic and very friendly and helpful, including Elaine who manages all of the bookings. I really hope that CT4N continue with the work they are doing in Mansfield, as we do not have a lot of transport which is accessible for people like me who struggle on public transport.”
As well as providing transport for the elderly and people with disabilities, community transport schemes can also help community and voluntary groups to get out and about, by providing access to affordable minibuses.
“Good transport links can provide so many benefits to improve health, wellbeing and reduce isolation. It can help people get to work, meet up with friends and access vital services for shopping and medical appointments.” said Ian.
“We know that some people may want to participate in the survey, but don’t have access to a computer, so we’re more than happy to receive feedback over the phone.” said Elaine Allitt, CT4N’s Charity Co-ordinator.
Any individual or organisation can participate in the survey which is open until Friday 13th August 2021 and can be accessed online here: https://www.surveymonkey.co.uk/r/CT4NMansfield.
Alternatively, anyone can contact CT4N Charitable Trust by email [email protected] or phone 01623 573800 if they prefer to speak to a member of staff directly.
Further details about this project can also be found on our website www.ct4n.co.uk/charity/mansfield.