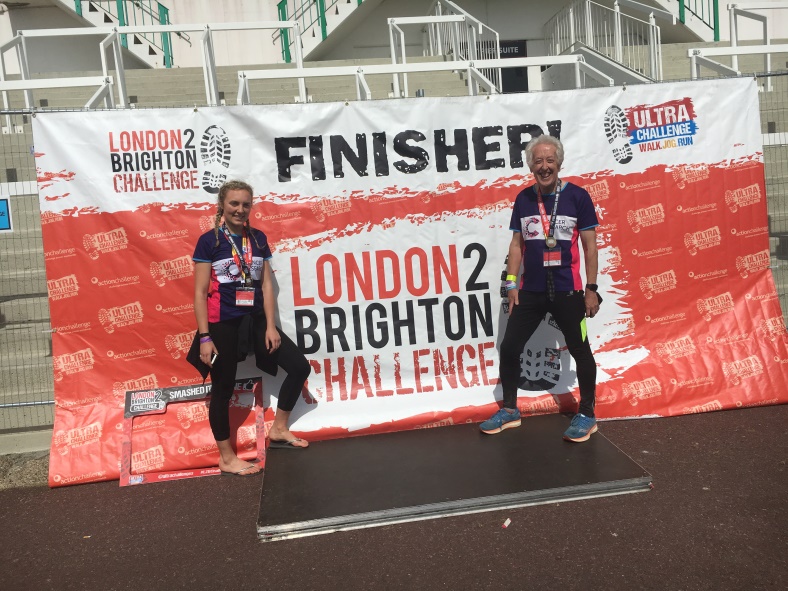 I wanted to say thank you so very much to everyone for supporting me on my 100k London 2 Brighton Challenge fundraising this year in memory of my beautiful Cazi, I am incredibly pleased to say that

my friend Ellie and I did it!!!!!!!!!!!!!.
We finally crossed the finish line on Sunday morning at Brighton Racecourse 24 hours after setting off from Old Deer Park in Richmond, London on Saturday morning, we powerwalked a total distance of 100km (62miles) only stopping for around 4.5hours in total at the pit stops en-route to grab a bite to eat, change our socks, give time for the lactic acid in our muscles to dissipate and to dress our blisters in the later stages which did suffer despite doing all the right things!!!  So in total we were walking for 19.5hours!!!!!!!!
It was so unbelievably tough, Ellie and I agreed it was the hardest thing either of us had ever done. During the day it was very hot and humid, it stayed really humid throughout the night which meant we had no respite from it. Whilst we are used to powerwalking at night from our Shine Marathons this was very different the overnight sections were predominantly off road so it was pitch black and we were following very narrow tracks through dense woodland with only our head torches to help us see where we were going, the ground under foot was extremely uneven and there were lots of protruding tree roots and overhanging branches that we were either limboing under or climbing over, the tracks were very steep too and we had never seen so many different types of styles we had to climb over so it was definitely a Challenge!!!!!
Ellie’s mum and sister acted as our back up crew following us in their car restocking us with much needed water, cold drinks and snacks to keep us going and generally encouraging us, they did a great job finding us at various stages throughout the Challenge. At one stage, we were feeling so tired as we climbed a very steep section at around 3am and were desperate for a cold drink with lots of ice in it and they appeared like two angels at the top of the hill with two cold flasks full of the drinks we were so desperate for they were life savers!!!!!!!
We experienced some very touching moments too at one point in a residential area an elderly gentleman was sitting on his garden wall cheering us all on and saying if anyone needed the loo they could use the one in his house, also there were quite a few places where families had set up tables outside their house with drinks and snacks and their children had drawn posters wishing us luck it was so moving that people took time out to encourage us all.
Unfortunately, I developed a spasm in my back muscles at around 80km which was so incredibly painful, which we put down to the fact I had been carrying a rucksack for over 20+ hours, that by 90km, I seriously doubted that I would be able to finish the Challenge as I was in so much pain but I would have been devastated if I hadn’t been able to complete it as I would have felt that I was letting Cazi, Ellie and everyone who had so kindly supported me down so I was determined to finish and with Ellie’s support we made it through.
I visited the sports massage people at the finish who did a tremendous job massaging my back and making me feel human again.
In the end of the 1174 people like Ellie and I starting the Full 100k Continuous Challenge 826 finished and Ellie and I were ranked 380th & 381st  respectively at the finish so we are happy with our result. 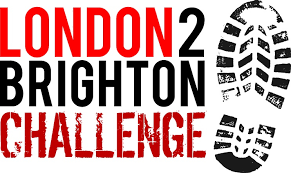 Thank you again to everyone who has supported me on my London 2 Brighton Challenge, so far I have raised just over £3,100 this year including gift aid which along with previous years brings my overall total raised to date to £28,100 which is absolutely fantastic but let’s not stop there, there is still time to support my fundraising efforts and any extra donations would be incredibly kind and really help Cancer Research UK in its vital research to bring forward the day when we beat Breast Cancer, so if you would still like to support my London 2 Brighton Challenge 2019 donations can be made securely on line through my Cancer Research Fundraising page:
https://fundraise.cancerresearchuk.org/page/mikes-giving-page-112
Since getting back from the Challenge, I have joined CRUK’s Volunteer Crew supporting various events, I have already helped out at the Nottingham and Loughborough Race 4 Life events and will be helping at many more events over the coming months. I am really enjoying being part of the Events Crew and have been acting as Backmarker Marshall at the Events, following people taking part around the course and reporting back to Event Control so not only am I helping out, but also still getting the miles in!!!!!!