Mansfield Building Society raises £14,000 for Macmillan in 2 years and extends support into 2019 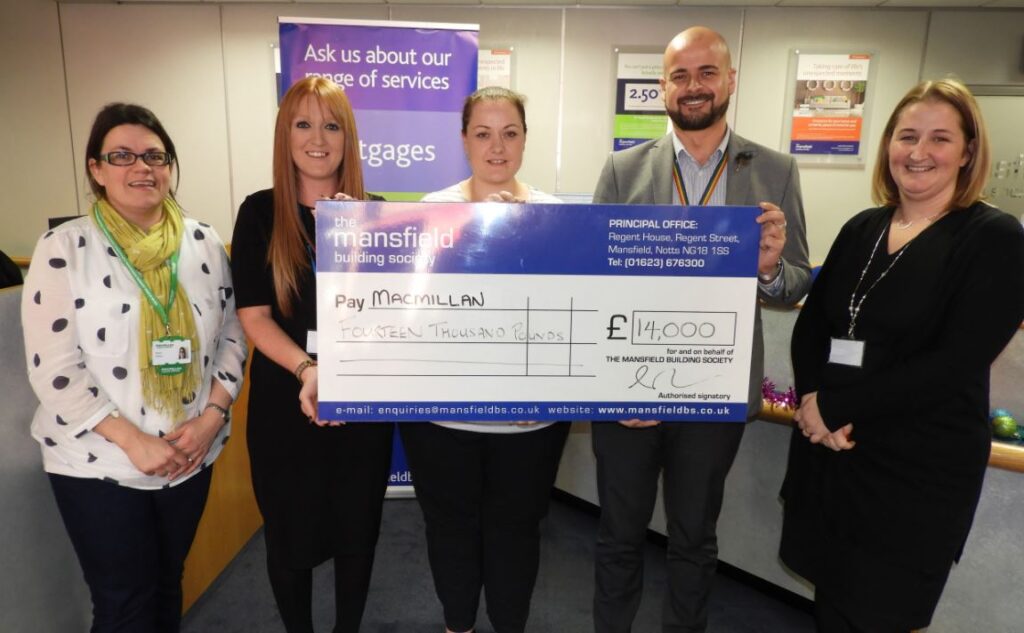 Mansfield Building Society has reached the milestone of raising £14,000 for Macmillan Cancer Support in just two years with all donations benefitting those affected by cancer in Mansfield, Ashfield and Chesterfield.

In December 2016, staff at the Society chose Macmillan as its Charity Partner, with a commitment to raise at least £5,000 over 2 years.  So enthused to be working with such a worthwhile charity, staff at the Society reached this goal within the first 8 months and have since gone on to raise the incredible sum of £14,000 over the 24 month period – almost 3 times the goal!

Staff members rose to the fundraising challenge and took part in numerous inspiring events. Many used their own initiatives to help meet the Society’s goal – teams volunteered to complete a hike up Mount Snowdon in 2017 and the Yorkshire 3 Peaks Challenge in 2018, staff also took part in a 20 mile branch to branch walk, a 40 hour bikeathon, the Peak District Mighty Hike and a Customer Service Manager even ran the London Marathon.

The Mansfield’s Charity Committee arranged a variety of activities too, including cake sales, raffles, themed lunches and sweepstakes for employees.

As the initial 2-year partnership came to an end, Society staff chose to extend their fundraising support for Macmillan into 2019.

“The past 2 years have seen staff put a lot of enthusiasm into the fundraising work they do and I know they will be just as dedicated this year. We are proud of all our staff for raising such an incredible amount and we’re excited to see how the funding will be used to help local people affected by cancer.

Every member of staff has been fully invested in our partnership with Macmillan and the support we’ve received from the charity has been terrific. Macmillan is an organisation which is close to the hearts of so many people at the Society and the fundraising has really added an extra buzz to our day-to-day work.”

“It is such a pleasure to work alongside an organisation that truly puts the local community at the heart of everything they do. As a result of the funds raised by the Society, we‘re able to offer a volunteer network at Kings Mill Hospital and help local nurses give vital support to those affected by cancer.”