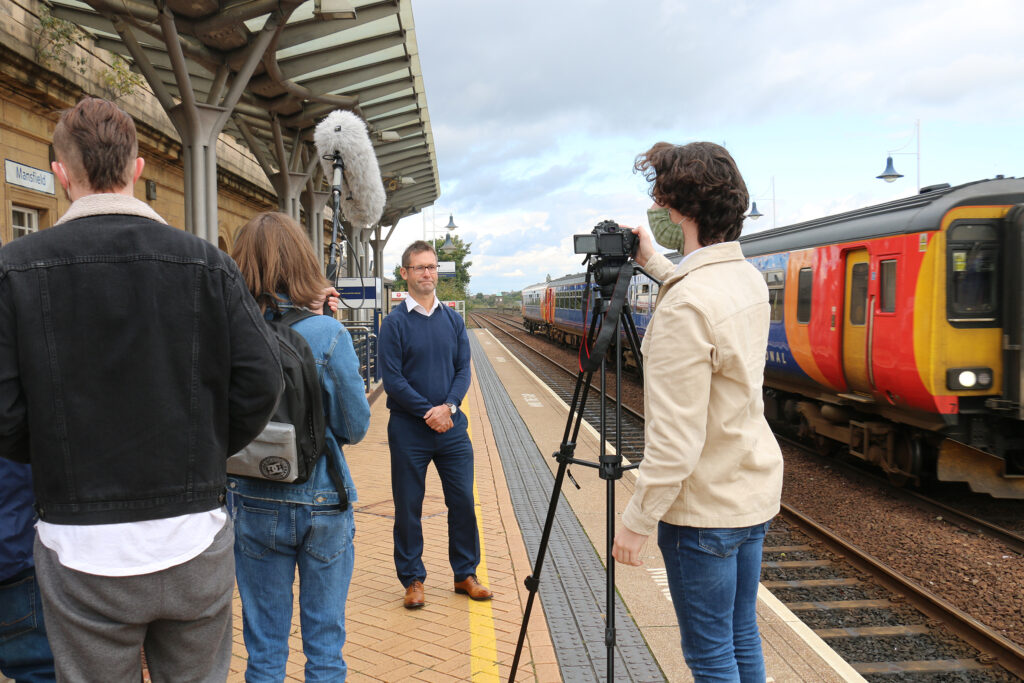 Media students from West Nottinghamshire College have played a key role in highlighting ambitious plans for redeveloping Mansfield district.
The Making Mansfield Place Board has recently outlined plans for how up to £25 million of potential funding could be spent on transforming the area.
If the bid is a success it means work can begin on some high priority improvement projects, which come under five key themes for improvement – town centres, skills and growth, transport and connectivity, health and wellbeing, and identity and brand.
Up to 13 projects have been identified by the Place Board, which is made up of representatives from a wide range of partner organisations. A decision on the Towns Fund is expected in January 2021. Further work will then be done to draw up plans before the final projects are delivered between 2022 and 2026.
In October students from the Diploma in Creative Digital Media Production (Film and Television) at the college were approached by Mansfield District Council to create a video to support the funding bid application to the Government.
Learners were tasked to create a video of up to five minutes long to capture the sentiment of the Mansfield District Investment Plan using aerial filming and photography and onsite filming which would highlight key areas of the town including stakeholders who spoke on camera about key projects for Mansfield. 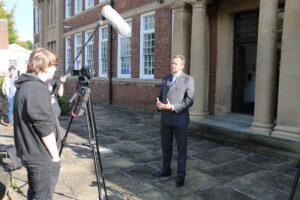 The group filmed on location in the district over three days which saw them capture a number of key figures on camera including their own principal and chief executive Andrew Cropley, who spoke about how through the funding a flexible training centre could improve the skills base and aspirations for young people, as well as working closely with Nottingham Trent University which now has a presence in the town.
Executive Mayor Andy Abrahams was filmed at Mansfield’s train station speaking about the accessibility to Mansfield and the need to maintain it being well-connected to other communities and the push for greener travel and improvements in parking and transport.
Students Joe Derbyshire, Thomas Crosby, Joshua Evans, Liam Marriott, Joshua Rosindell and Joe Gardner worked professionally with their tutor Michael Rhodes and their learning company specialist for design and media, Tony Hall to film and edit all the content ready for the Council to use within their bid for the funding.
Student Joe Derbyshire said: “It felt great to be involved in this project as it gave me and the crew a feeling of satisfaction knowing that it would be used outside of college in a professional setting.
“The feedback I got for my editing was good and it felt like our work was appreciated. It’s great that we’re getting more and more opportunities like this which we can put on our CVs and showreels.”

Executive Mayor Andy Abrahams said: “We are fortunate to have the college’s world-class facilities on our doorstep and it is important that we support local talent whenever possible. As key members of the Place Board, we were keen for the college and its students to be involved in this exciting project.
“The students were incredibly professional during filming and the finished video is exactly what we were aiming to achieve. Hopefully it’s given them practical experience that will help them in their future careers.”

The students’ learning company was set up to offer local people and organisations services in branding, web design and content creation and video production and editing. The learning company is enabling students to develop entrepreneurial skills, working with real customers and enhancing their business skills working to live briefs.
Design and media learning company specialist Anthony Hall said: “This was a great opportunity for our film and TV students to showcase the skills they’ve been learning at college.
“The film created by our students is of a very high standard and I am incredibly proud of them. It’s very much on par with what a professional production company would produce.”
You can see the video that the students created for the bid application here.