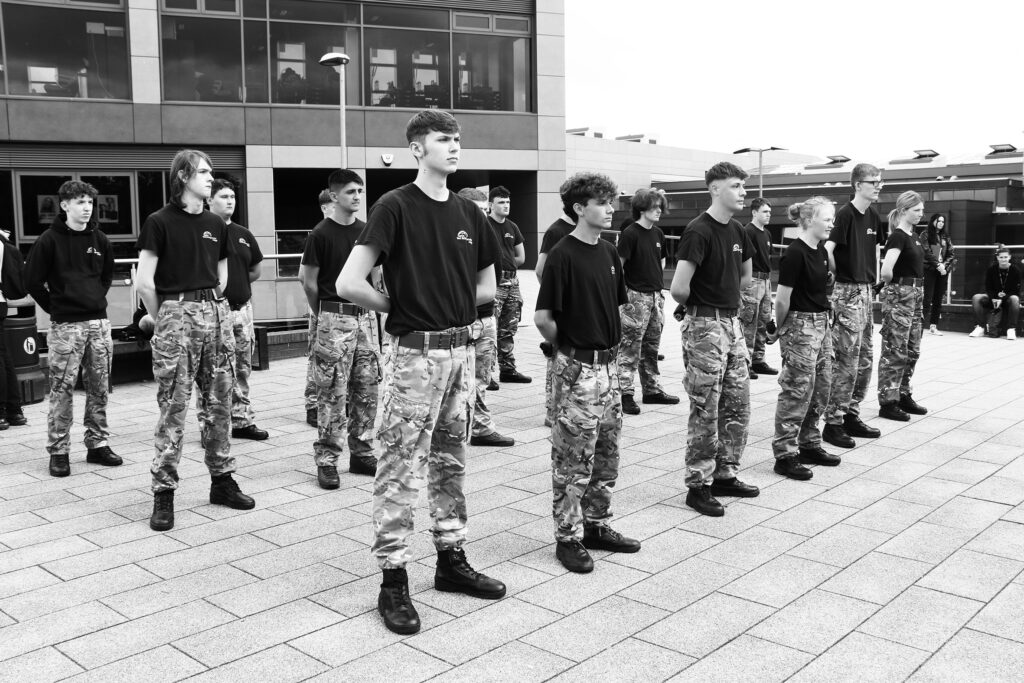 Second year students on the Advanced Extended Diploma in Uniformed Protective Services were officially recognised at the beginning of the new term, for their progress and achievement to date.

The parade at the Derby Road campus, saw principal and chief executive Andrew Cropley present the group of 18 with blue berets together with pin badges which read ‘palma non sine pulvere’. This is a Latin translation for ‘no reward without effort’.

The badges were commissioned by the UPS teachers and were then designed and produced through a 3D printer by engineering students at the Kirkby-in-Ashfield-based Engineering Innovation Centre.

The students’ berets are to represent the berets which troops in the British Armed Forced receive. They have become a component of military uniforms and are worn pushed to the right of the head, designed to free the shoulder that bears a rifle on most soldiers.

The berets, which are made of felt, must be shaped to fit the individual’s head, by being immersed in cold and warm water, wrung out and placed on the head to the correct shape. The pin badge then goes directly above the left eye.

The morning before the official presentation, which was observed by teachers and members of the college’s executive team, students took part in an equipment race. The exercise tested their skills learnt on the previous year’s course.

The group was challenged with physical tasks which were heavily based on teamwork, dexterity, co-ordination and strength, working with heavy equipment. This challenge fully-replicated a military equipment race and was overseen by teachers Wayne Hall, James Maosa and Derek Dawkins, themselves former military personnel.

Principal and chief executive Andrew Cropley said: “I was very honoured and proud to present the berets to our second-year students, which recognise their progress and achievement to date. It was good to hear their ambitions, all of which were being supported by their course.

“I think they also made something of an impression on those other students who witnessed the parade outside the Derby Road campus.”

Student Zuzanna Soltys, 17, said: “Being presented with the beret made me feel very proud. The equipment race we did prior to the presentation taught us discipline and great teamwork. Our teachers really look closely at teamwork and I think we all worked well together.

“I’ve been shaping my beret by placing it in cold water, then in hot water. We did this in class and we had to do this several times to get the shape right.