New chair of governors “excited about the journey ahead” 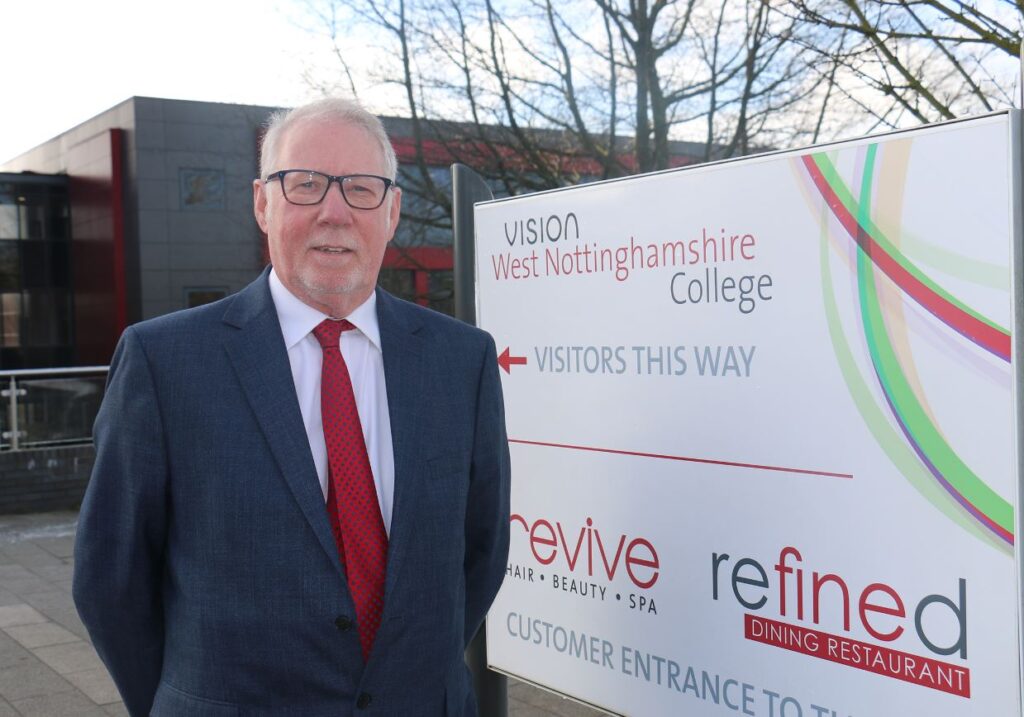 A highly-experienced senior executive with a strong track record of helping organisations improve their performance has been named as West Nottinghamshire College’s new independent chair of governors.
Sean Lyons officially took over the role on Friday 1 February, heading-up the college’s new-look corporation board, which has been bolstered by a string of recent appointments that have broadened its expertise.
He succeeds Nevil Croston, who stepped down in December 2018 after almost five years in the role.
Mr Lyons, 62, is an accomplished industrial executive with more than three decades of experience in the steel and manufacturing sectors, where he held high-ranking positions at some of the world’s leading steel firms.
He is also a former NHS chairman, having headed-up the board of directors at Sherwood Forest Hospitals NHS Foundation Trust, which runs King’s Mill and Newark hospitals, for a three-year term between June 2013 and June 2016.
Explaining what attracted him to join West Notts, Mr Lyons said: “I’ve become very fond of Mansfield and Ashfield, in particular the people that live and work in the area, and I was looking for a new challenge. Although the college is going through some significant difficulties at present, I’ve experienced similar situations at other organisations in the past, where things needed to improve, so I’d like to see what I can do to help.”
He described the role as chair as a “major privilege”, adding: “I intend to hold that privilege very carefully and do whatever I can to provide the leadership and guidance that is needed. I’m excited about the journey ahead and certainly not daunted by it, although I don’t underestimate the challenge either.”
Mr Lyons said he and his fellow governors, together with the senior management team led by interim principal and chief executive Martin Sim, would do everything in their power to return the college to a stable financial footing, which would involve a wholesale review of the scale of its operations.
He insisted staff would continue to be “treated with dignity and respect” during a difficult restructuring process.
And he promised the student experience would not be affected, saying learners could feel assured that their teaching and learning remained the number-one priority.
Mr Lyons continued: “The immediate goal is to improve the college’s finances and re-focus the organisation. We need to demonstrate that we are creating a financial recovery plan that is both viable and deliverable, that we continue to closely monitor our performance, and that keeps everybody – staff, students, the local community, and our funding agencies – informed about our progress.
“In addressing the issues that have driven these financial pressures – basically, the college has over-stretched itself in previous years – the organisation now needs to alter in size, in accordance with the provision that it’s capable of delivering.
“We will be re-focusing the college to become more of a local provider, tuned-in to the requirements of the community.
“Sadly, this means some short-term pain as we implement a staffing restructure. However, we will do our utmost to ensure that people are always treated with dignity and respect, and use all opportunities to re-deploy colleagues into other roles or help them find alternative employment.
“Regardless of the changes taking place, we will absolutely make sure that students feel the experience they’re getting is one that is improving all the time.
“Once we come through this difficult period, I’m very confident the college can look forward to brighter times. We are fortunate to have an extremely high-calibre of staff and a strong record of academic and vocational achievement.
“We can’t change what has happened in the past – but we can influence the future. This community needs and deserves a thriving further education college that is fit-for-purpose and that provides every learner with the opportunity to improve their life chances.
“By working together, staff across the entire organisation and governors will embark on a journey to make this college outstanding again.”
Mr Lyons, who has 30 years’ experience in the steel production industry, started his career as an apprentice with British Steel. He then went on to work for Avesta Sheffield, and AvestaPolarit Oyj, in a variety of senior engineering and operations management positions in the UK and Scandinavia.
More recently Mr Lyons was senior vice-president for strategy at Outukumpu Oyj, the world’s second-largest stainless steel producer, based in Finland; and director of the sections and plates arm of Corus UK Ltd, with responsibility for UK, European and world-wide markets.
His last executive position was as site director of Tata Steel UK’s Scunthorpe steelworks between 2008 and 2011, where he led its operations and 7,000 employees and contractors. Mr Lyons received plaudits for achieving £50 million cost savings while helping steer the company through the most challenging downturn in demand for over 50 years.
After retiring from Tata Steel, Mr Lyons served as non-executive chairman of TrueBlueSky Social Enterprise – a network of experts within the health, education, community and industry sectors, operating in the Yorkshire and Humberside region – from 2012-2018. He currently operates as a senior consultant with McLellan and Partners Ltd and GLG Council, and also delivers private mentoring and coaching.
Mr Lyons holds an MBA from the Warwick Business School and an engineering degree from the University of Bradford. He is a chartered engineer and a Freeman of the Company of Cutlers in Hallamshire. Mr Lyons was also the President of the Lincolnshire Iron and Steel Institute from 2010 to 2011.
He lives in Worksop, Nottinghamshire, with wife Samantha, with whom he has three daughters Rachael, Jessica and Hettie.