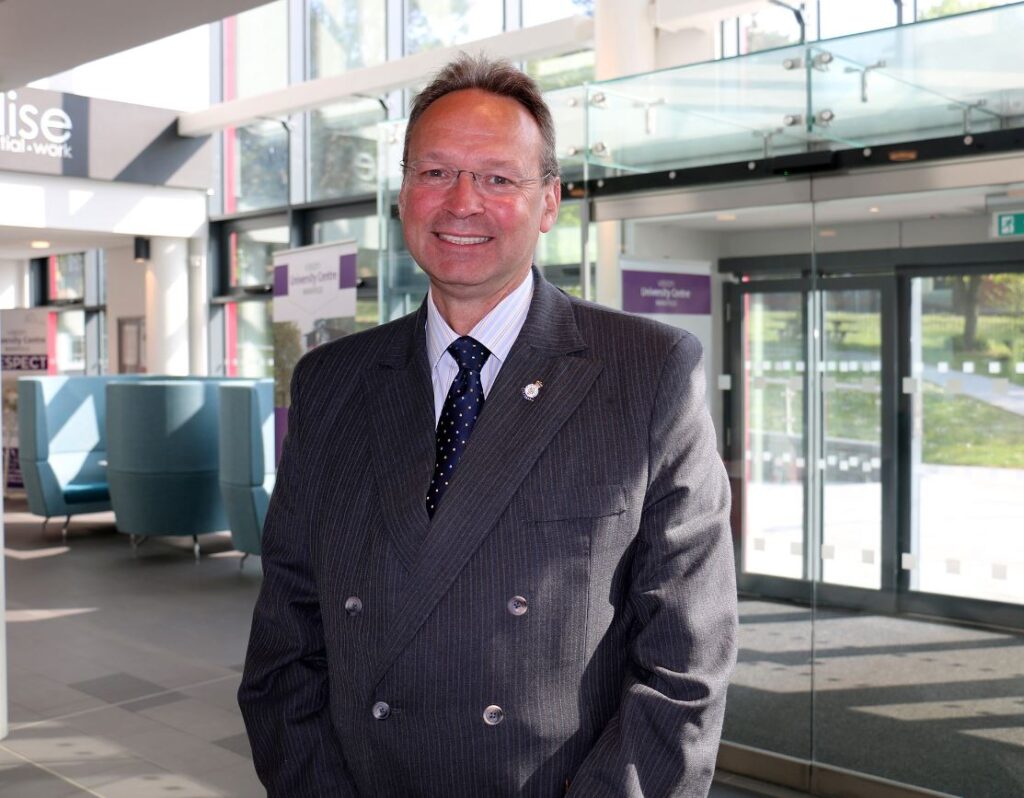 West Nottinghamshire College has announced the appointment of its new permanent principal and chief executive.

Andrew Cropley is set to take over from interim principal and CEO Martin Sim. It is expected he will commence the role in July 2019.

Currently the principal of Craven College, in Skipton, North Yorkshire, Mr Cropley is credited with developing a pioneering partnership between the institution and Leeds United Football Club, enhancing its business curriculum through a link with the Skipton Business Improvement District, and growing its provision for students with learning difficulties.

Previously, he was interim principal at Cadbury Sixth-Form College, Birmingham, which he led from financial crisis to a successful merger with Sandwell College.

The 53-year-old, of Coal Aston, Derbyshire, comes with a wealth of experience in the further education sector, having worked in senior roles for the past decade, including at colleges in financial recovery.

He said he was “excited” to be joining West Notts and to have the opportunity to play an instrumental role in its “rebirth”.

Mr Cropley said: “I have an absolute passion for the mission of further education and I’ve loved every day that I have worked in the sector, seeing the amazing things that it does for young people and adults in enhancing their skills, employability and careers.

“West Notts is a college that has so much to offer, in a community that needs a thriving, successful, local further education college. As somebody relatively local to the area, the opportunity to come and play a part in the rebirth of the college was one that I simply could not resist.

“I am coming here to make it the best college that it can be; to make it part of a successful community and to enable everyone who comes through our doors to fulfil their potential. If we do that, then everything else will follow naturally. I’m really excited by the prospect.”

Describing his leadership style as “personable and engaging”, Mr Cropley pledged to “try to get to know every member of the team and understand the role that everyone plays, and the skills that they bring.”

He added: “I very much see my role as enabling everyone in the college to do their absolute best for the benefit of our students and the communities of Mansfield and Ashfield.”

Recognising the challenge ahead in restoring the college’s fortunes, Mr Cropley said: “My message to staff and the wider community is that I’m really confident about the future of the college. If we all work together and are determined to do our utmost to take it forward, West Notts will fairly quickly become everything we know it is capable of being.”

Welcoming the appointment of Mr Cropley, chair of governors Sean Lyons said: “After a rigorous selection process, we believe we have found the outstanding candidate in Andrew and we look forward to him joining us.

“Governors were hugely impressed with Andrew’s ambition for the college. He is a very people-orientated leader with a lot of experience of college curriculum, along with strong financial skills. We expect his focus internally will be on driving the transition between the existing shape and the new shape of the organisation, while also focusing externally on making sure the college builds on its role and reputation in the local community.

“There was extremely keen interest in the position, which shows that despite the current difficulties, the college is still seen as a major player and a really attractive place to come to. We have found the best candidate out of a very strong field of applicants.”

Meanwhile, governors paid tribute to the work that interim principal and chief executive Martin Sim has done in rebalancing the college’s finances and establishing a solid foundation on which Mr Cropley, the board, senior managers and staff across the organisation can build on.

Mr Lyons added: “On behalf of the board of governors, I would like to pay tribute to Martin, who has provided excellent leadership while he has been at the college and we are glad that he will be here to ensure a smooth transition in leadership.”

Mr Sim, who is expected to remain at the college until July as part of an “agreed handover”, said: “I’m delighted that Andrew has been appointed to the role of principal and chief executive. The college grows stronger each day and his skills, passion and enthusiasm for further education will accelerate its recovery.

“The college is in extremely good hands.”

Mr Cropley started his professional life within the armed forces, serving as staff officer for personnel development in the Royal Navy and, subsequently, as commanding officer of the Defence School of Languages in a distinguished 21-year naval career.

His first role in the education sector was as executive director at The Sheffield College, progressing to the position of executive director for strategic planning during his six years at the institution. While there, he became chair of Sheffield University Technical College (UTC) Academy Trust – overseeing the design, delivery and opening of the new, employer-led school for 14-19 year-olds, which earned a reputation as one of the country’s best-performing UTCs.

He then joined Warwickshire College as group deputy principal (FE and HE curriculum), where he played an instrumental role in its merger with South Worcestershire College.

Mr Cropley took over as interim principal and chief executive of Stratford-upon-Avon College in 2017, and steered its merger with Solihull College and University Centre the following year, leading to improved performance, before joining Cadbury Sixth-Form College.

Mr Cropley is married to Andrea, with whom he has two daughters; Elinor, 13, and Madeline, 12. He is a trained meteorologist and oceanographer. Originally from Lowestoft, Suffolk, his hobbies include horse-riding, watching cricket, and supporting Norwich City Football Club.