Patrick’s stirring up a whole lot of success 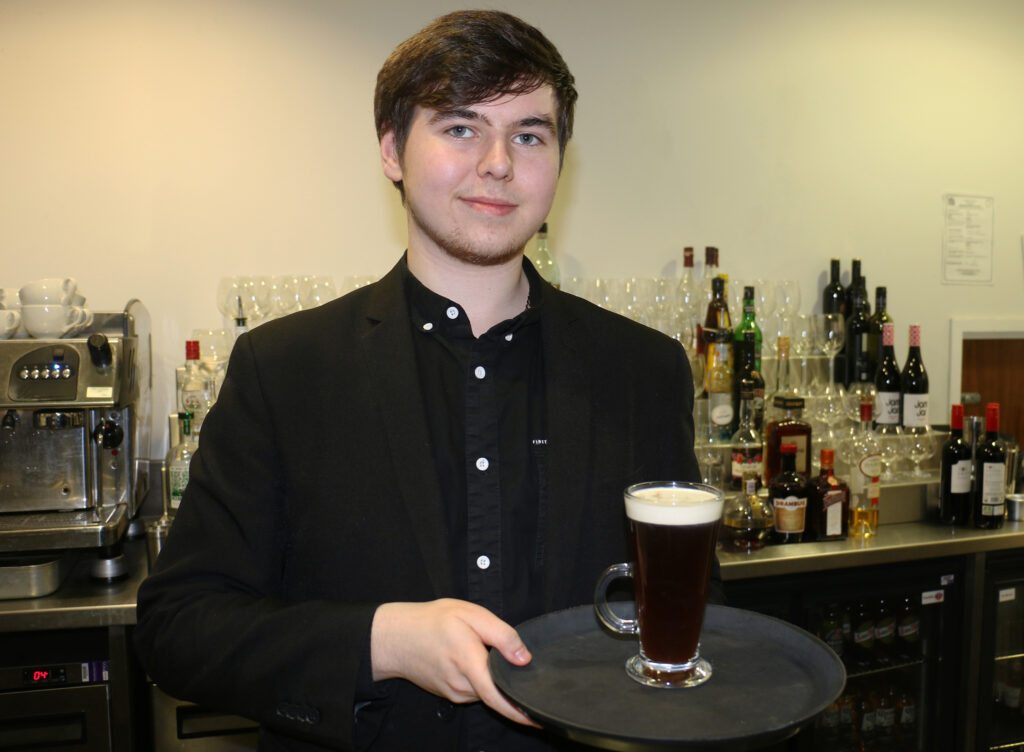 Staff and students in the hospitality team at West Nottinghamshire College are toasting a student’s national competition success with an Irish coffee with a twist.
Level 3 Hospitality, Supervision and Leadership student Patrick Murray has successfully reached the national heats of the famous Toque D’Or competitions for his vegan version of a traditional Irish coffee.
The Nestlé Professional Toque d’Or college competitions began in 1989. It is a highly-prestigious catering competition and it’s unique for focusing on both chef and front of house, students and apprentices.
The brief was to produce something vegan and Patrick chose the Irish coffee. His creation was filmed by the college’s own film and TV students and the video was sent to the Toque D’Or judging panel.
The drink was created by pouring Americano coffee into a latte glass, adding a shot of Irish whisky and then finishing with adding a thick coconut cream on top, in place of dairy cream.
The nineteen-year-old from Selston is now one of 25 students in the UK who are through to the national heats which take place on 4 March Nestlé’s headquarters based at Gatwick Airport.
Patrick said: “I wanted to enter this particular competition because vegan food choices are becoming more of a trend and people are wanting to lead healthier lifestyles and I thought it would be good to promote that.
“I’m so happy to be through to the next round and I want to be able to test my skills that I’ve been learning over the last three years at college. I also wanted to see how well I cope under pressure in order to give me a new challenge. I like to be pushed to gain new skills and want to surprise myself with what I can accomplish.”
Fellow front of house student Reece Zadins also entered the competition with his Cointreau hot chocolate made with coconut cream, while Level 2 and 3 Catering and Hospitality students Steven Blease, Josh Bradwell, Oliver Cooper, Harvey Bevan and Chris North all put their cookery skills to the test to produce a range of vegan-themed dishes.
Patrick’s drink can be seen being created in this video:


← Back to Business News