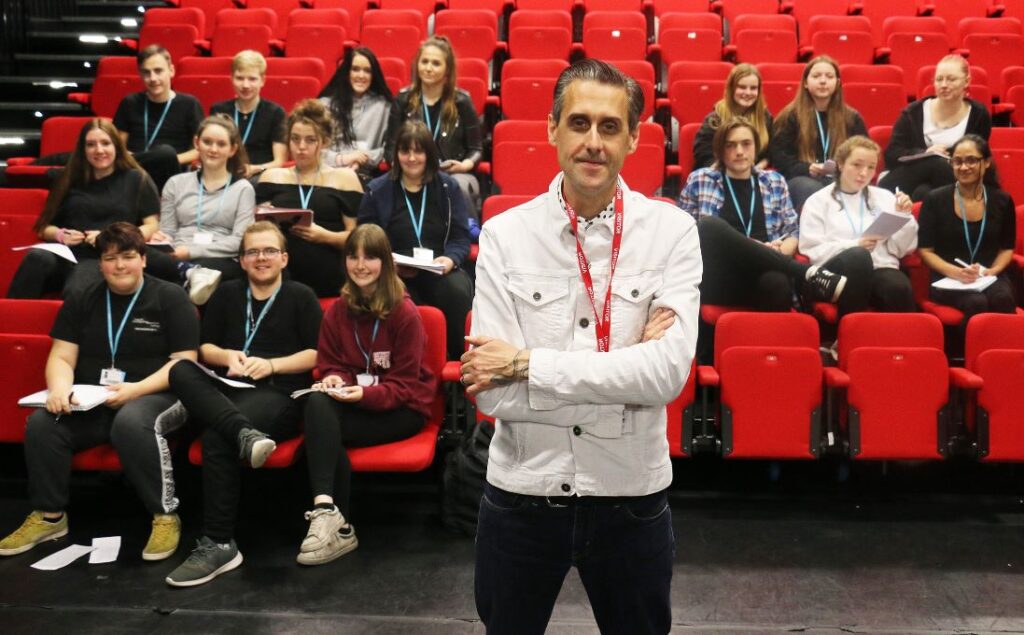 Performing arts students put the spotlight on creative professionals in the Create theatre and studios – learning more about the sector and Higher Education during their industry week in December.

Rebecca Streets and Emily Thurlston from Nottingham-based Dance 4 were on hand to speak about the internationally-recognised dance development agency. Dance 4 works to support UK and international artists to create new ideas in choreography.

Rebecca spoke to students about her background and training as a dancer and how she came to work for Dance 4, while Emily described the process of setting up as a freelancer. Students were able to ask about the pros and cons of going into the dance arena as a freelance artist, to add to their knowledge-base when thinking about careers.

Representatives from the University of Creative Arts visited on Tuesday (18 December) to talk about the range of courses on offer, while Sheffield Hallam University’s senior lecturer in performance, Sophie Wildgoose, led a monologue feedback session with the budding actors. Sophie advised those students who wish to apply to study at the university, can be fast-tracked through the video interview process.

Mansfield Palace Theatre’s education director Chris Neal paid his annual visit to the college as part of the Write Track project, which enables young actors to audition for a play, usually written by a local playwright, and is staged at the college’s Create Theatre.

Students auditioned for this year’s piece, being written by Alan Dawson, and several students will be recalled in January to begin rehearsals on the piece called How Poppy Really Meant It. Students will be part of the development weekends where they will work collaboratively with Alan, while gaining performance and technical work experience until the April show.

Thursday saw former college media tutor Andrew Graves delivering a writing workshop with first year students. Andrew, who writes plays and modern poetry, helped students create their own original poems which they shared back to him and the group and gathered his professional feedback.

Level 3 BTEC Performing Arts student Marcus Annable, 16, said “We’ve been able to expand our knowledge of interpretation and widened our learning of literature, helping us get a good insight into the industry.”

Simon Watt, programme area leader for performing arts, said: “It’s been a very varied and worthwhile week for our students to meet so many different professionals. It’s all good inspiration.

“We learnt recently that one of our guest actors who came last year has had his own success through sheer determination and perseverance. James Nicholson starred in panto at Nottingham Playhouse last Christmas. He’s now starring in Les Misérables at the Queen’s Theatre in London, playing Joly and is understudy for Marius.

“This will go to show our students that success really does come – providing you commit to your art, develop your skills and stick with it.”