Sat Bains inspires next generation of chefs and managers 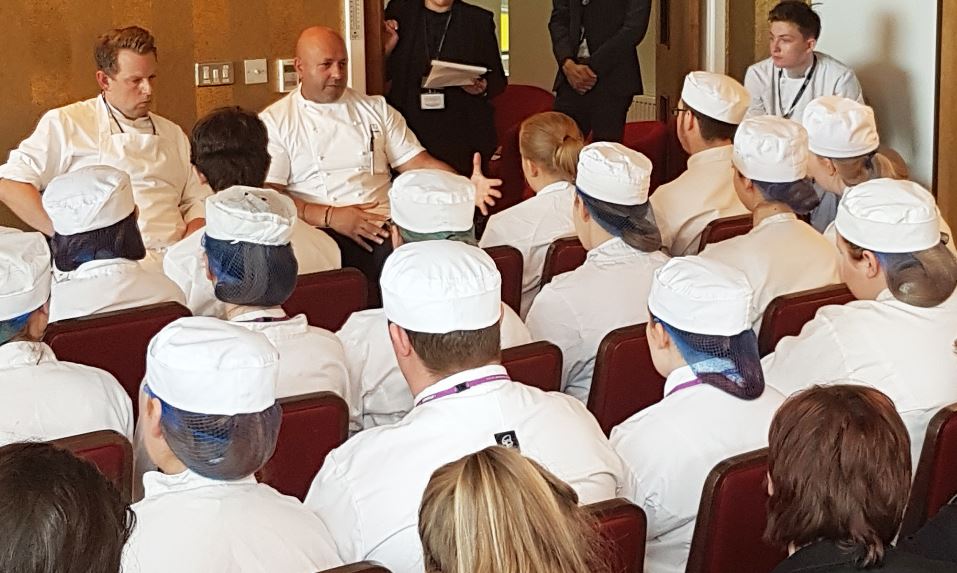 One of the country’s best chefs, Sat Bains, joined catering and hospitality students at West Nottinghamshire College to share his tips and expert insight on forging a successful career in the industry.
The gastronomic genius took part in a question and answer session with budding chefs, front-of-house professionals and managers, who quizzed him about his life, career path and his advice on the best way to continue their professional journey.
Sat, who is usually busy managing his two Michelin-star establishment Restaurant Sat Bains with Rooms, in Nottingham, which is ranked as one of the UK’s finest, gave up time from his busy schedule to inspire the group of 40 learners to continue with their studies and culinary practice to reach their chosen career.
Topics included things which inspire his culinary creations, types of food which excite him, and his advice to those about to leave college after completing their studies.
Sat, who has gone on to enjoy a hugely successful career after winning the prestigious Roux Scholarship almost 20 years ago, told learners one of the biggest inspirations to his dishes are the seasons; explaining how he tries to perfect a seasonal dish each year, giving it an exciting and fresh dimension, with taste the number-one element, and seeing it evolve.
He advised students to give themselves a five and ten-year plan, thinking where they want to be in their professions and encouraging them to push themselves to achieve their ambitions
Sam Woolhouse, from Rainworth, who studies on the Level 3 hospitality and supervision leadership course, said: “It’s been an amazing experience to have Sat with us here; he’s someone with a great reputation. For me, he’s helped me to focus on what I want my future goal to be. I’m looking towards being a bar supervisor.”
Lucy Wilcockson, 28, from Mansfield, is studying the Level 3 Diploma in Professional Cookery. She said: “It was so informative to hear from someone who has worked his way up from a college education to becoming the renowned chef he is today. It was the first time I’ve met Sat and he’s someone I really look up to.
“He’s one of the highest-attaining chefs in the UK at the moment and it was fantastic to hear all his tips and knowledge. He’s also a really nice guy.” 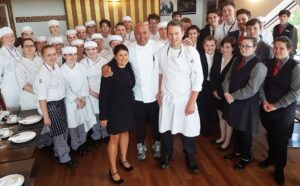 Speaking afterwards, Sat said: “The students posed some really intelligent questions. They’re obviously looking carefully and seriously at their career pathways ahead of time, and took great advantage of speaking to someone with 31 years’ experience in the industry.
“I have plenty of knowledge and information that they can glean and I’m always very happy to share this with them.”
A well-known face on television shows such as the BBC’s MasterChef, Saturday Kitchen and Great British Menu, Sat was visiting the college to help judge the Best Young Chef category of this year’s Nottinghamshire Food and Drink Awards – the fourth consecutive year the college has hosted the cook-off in its training kitchens.
This saw six chefs from restaurants across the county compete to create a winning main course and dessert, with the winner announced at this year’s Nottinghamshire Food and Drink Awards on 14 June at the De Vere East Midlands Conference Centre, Nottingham.
In a further boost to the college, one of the competitors was a recent professional cookery student there. Lewis Kuciers graduated from the NVQ Level 3 Diploma in Professional Cookery in 2015 and has already achieved much acclaim in his relatively short career.
Lewis is joint-head chef together with Craig Hadden, another ex-student, at The Black Bull, Blidworth, which was awarded two coveted AA Rosettes – one of only two pubs in Nottinghamshire to hold the accolade – last year. Lewis also achieved a prestigious individual honour in 2017, as one of just seven chefs to scoop a Craft Guild of Chefs Graduate Award, joining its coveted Hall of Fame.
Lewis, 21, said after competing in the challenge: “Today went really well for me in the competition, and it’s great to be back at college where I did my chef training.
“Being in a competition environment is so completely different to work-life. The pressure is very different but I’ve enjoyed it. I’m quite confident competing in competitions as last year I competed in the Craft Guild of Chefs Graduate awards which I scored well in and in a few weeks I’ll be competing in the Young National Chef of the Year – I love getting this practice and meeting new chefs.”