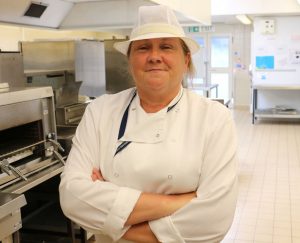 West Nottinghamshire College cookery mentor Mandy Prince is celebrating being named the best in the country.

She was recognised for showing exceptional dedication to helping students achieve their full potential during her 15-year career at the Mansfield college, where she has trained hundreds of would-be chefs and equipped high needs learners with independent living skills.

Mandy, from Rise Park, Nottingham, triumphed over finalists from a host of colleges to claim the national accolade.

She said: “I was overwhelmed when my name was announced. It certainly felt a very long walk up to the stage, but I was also very proud of myself. It was nice to know my hard work over the last 15 years had been recognised in this way.

“I’ve been congratulated by many colleagues and students, and my family are absolutely thrilled. I’m still trying to take it all in.” 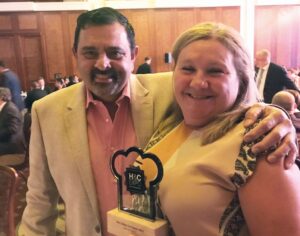 After collecting her engraved trophy, Mandy was immediately congratulated by chairman of the judging panel, celebrity chef Cyrus Todiwala OBE, who made a point of seeking her out to offer his praise and say how much her nomination had personally impressed him.

“Cyrus came over to me and said ‘I had to tell you what an inspirational lady you are. I read your nomination and really wanted you to win.’ That brought a tear to my eye,” said Mandy.

Mandy joined the college in 2003 as head of stores, responsible for ordering produce and ingredients to be used in cookery lessons, maintaining stock levels, and ensuring kitchen equipment was in good working order.

But her real passion was nurturing students and she could often be found teaching them basic kitchen skills, having had vast experience in various catering roles over the years including as a cook supervisor at a care home.

After gaining her City and Guilds Assessors Award qualification at the college, Mandy began helping learners work towards their cookery NVQ, as well as voluntarily supporting those with high needs such as emotional, behavioural and learning difficulties.

This saw her being asked to take on her own groups of catering students on entry-level and introductory courses, supervising their work in the college’s production kitchens.

Amongst the procession of students Mandy has taught over the years, many have gone on to forge promising careers both locally and further afield, with some working in Michelin-starred restaurants.

Yet she is equally proud of her work with high needs students, for whom she develops strategies to keep them engaged and maximise their learning and skills. 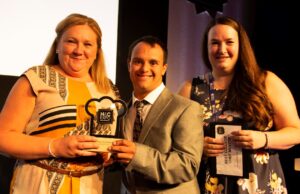 Mandy said: “There’s nothing more satisfying than seeing students who joined us with challenging issues, or those who struggled at school, progress in their education at college and then move into employment.

Curriculum manager for hospitality and travel, Helen Wilcockson, who nominated the popular mentor, said: “The entire team is extremely proud of Mandy for gaining this award. She more than deserves it for all her dedication, hard work and sheer passion for inspiring the trainee chefs.”

Run by industry title Hospitality & Catering News, the Chef Mentor Awards recognised the most inspiring mentors working across all major sectors of the trade who have trained, nurtured and developed aspiring chefs. They were held as part of H&C EXPO, a two-day event designed to help future-proof the industry and the first of its type for the sector.

The awards were attended by more than 200 guests from the world of restaurants, hotels, catering and education who joined finalists across 10 categories.

Winners included legendary Michelin-star chef Albert Roux OBE, who received a special award for his life-long commitment to the training and development of chefs who have now become leading names in the industry.

Chief judge Mr Todiwala OBE said: “Every single one of the chefs who were nominated have given so much to the industry and have helped us continue to be one of the most significant contributors to the UK economy.

“All the mentors deserve recognition and we’d like to express our sincere thanks for all they do. Our industry is built on the talent, hard work and total commitment to development of many of our winners.”

Denis Sheehan, publisher of Hospitality & Catering News, who developed the awards in association with Mr Todiwala, said: “We were delighted for Mandy to win her mentor award. The feedback from the judges was unanimous and resounding, recognising her unique skills and application.” ← Back to Education