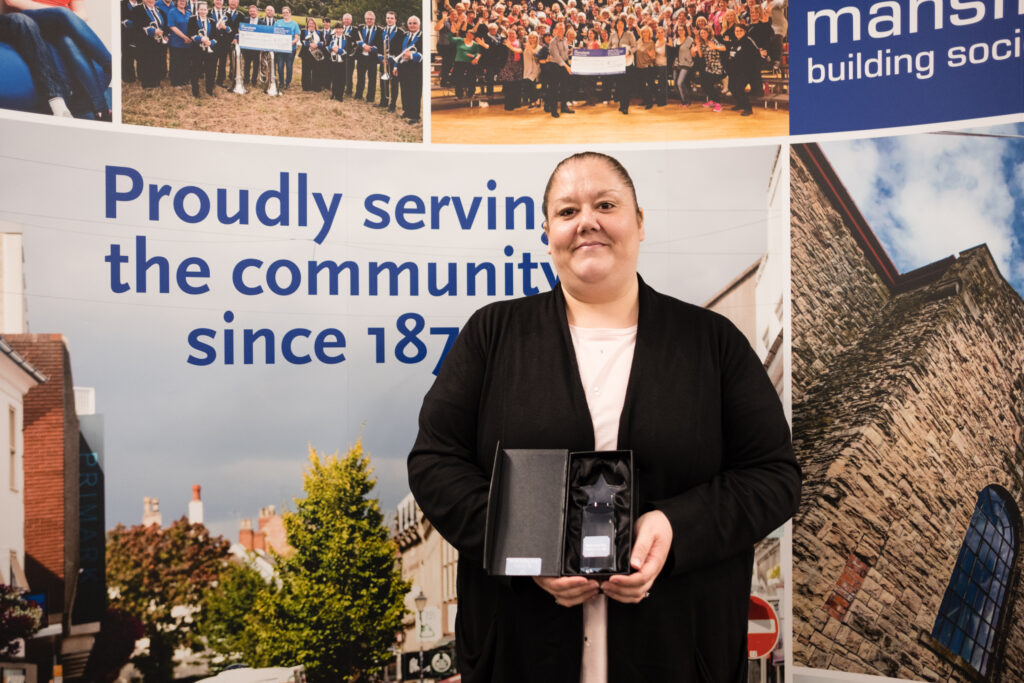 Mansfield Soup Kitchen’s Sara Spalding has been awarded Mansfield Building Society’s 2018 Community Star Award for her work with the homeless.
Sara, who is one of 9 volunteers at the soup kitchen, won the Community Star Award for her commitment and dedication to helping those sleeping rough on the streets of Mansfield. Her selfless contribution to the soup kitchen includes securing a regular flow of food donations as well as preparing the meals for those in need. However, in addition to her voluntary work in the soup kitchen, Sara goes the extra mile to ensure that those most vulnerable are safe, providing tents, sleeping bags and other provisions to ease their plight.
During one of the harshest winters in recent times, Sara battled the elements to locate a rough sleeper who had been badly beaten.  After locating the individual and taking him to hospital in the early hours she stayed with him until he was discharged. Not content to see him return to the streets, Sara managed to find him accommodation for the remainder of the night, paying for his bed and breakfast out of her own pocket.
The award was presented to Sara by last year’s Community Star winner, Jo Scott from the Nottinghamshire Search and Rescue Team.  As well as being awarded Community Star status, Sara also scooped £100 Love2Shop vouchers as part of her prize, as well as a £150 donation for the Mansfield Soup Kitchen.
There were 45 nominations for the 2018 Community Star Award, including representatives from sports groups, community groups and local charities.
In addition to the Community Star Award, The Mansfield also recognised Richard Walker with its Lifetime Community Contribution Award for his work with Chesterfield Amateur Boxing Club.  A founder member of the club, Richard has been a mainstay since 1974 and even though he’s now in his 80’s, he can still be found coaching aspiring young boxers at the club today.
Tagan Masters, a 14 year old volunteer with Worksop-based From the Heart Charity, was awarded the Society’s Young Community Star Award for her inspirational commitment to the charity.
The awards were presented at the Society’s Annual General Meeting (AGM) on Thursday 26 April, where The Mansfield also reported on its commercial success in 2017; the impact of its staff’s fundraising for charity partner Macmillan, and how its Charitable Trust is funding the Prince’s Trust Team Programme for disadvantaged young people in Nottinghamshire.
Commercial Development Executive, Richard Crisp, said that it was important that the hard work, dedication and personal contribution that so many local people give selflessly to the community is recognised:
“As a local building society, we’re extremely proud of the community in which we serve, so we feel it’s important that we recognise the incredible work done by volunteers who support the quality of life and wellbeing for all in our community.
We’re delighted to be recognising people like Sara, Richard and Tagan at our AGM. The number of applications we receive is testament to the community spirit that is thriving in our local area.”
Picture caption: Sara Spalding with her Community Star Award at The Mansfield Building Society’s Annual General Meeting