Students on a mission towards environmental tutorials for all 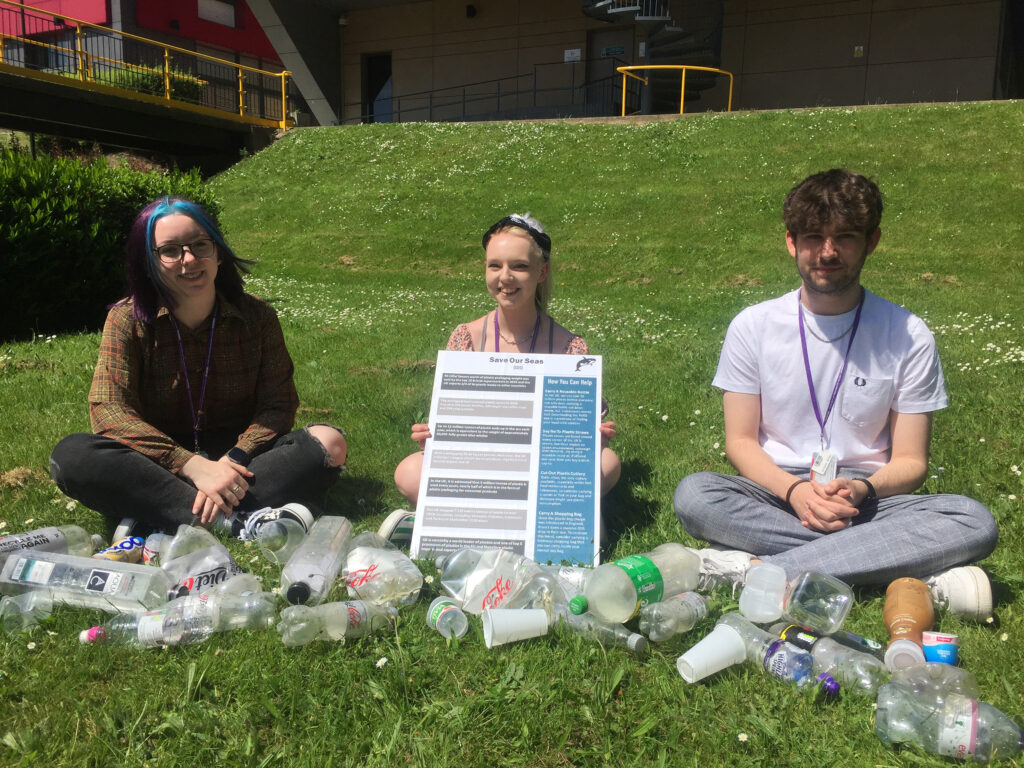 With up to 12 million tonnes of plastic ending up in our oceans each year, students from West Nottinghamshire College are aiming to get the message of cutting out or reducing plastic use amongst their peers.
A Level students Jessica Combe, 17, Connor Baugh, 18, Jessica Jones, 19, have a mission in mind to see all students have mandatory tutorials delivering positive and important environmental messages, including how to prevent plastic pollution in the sea.
They believe that formal tutorials would help to influence students to recycle properly in college and would mean that they can apply these lessons outside of college to have a greater positive impact.
They have launched the Save Our Seas campaign, which is part of the ‘My World, My Home’ project – an environmental leadership project delivered by Friends of the Earth and Students Organising for Sustainability UK.
The trio started with a survey of fellow students in October to ask what environmental issues most concerned them. They found that climate change and plastic pollution were the students’ biggest concerns. So they chose to campaign on plastic pollution as they thought that was something they could address at the college.
Jessica Combe, who is studying A Levels in chemistry, biology and English language, said: “We began our research in March. We had a few ideas to begin with on what environmental issue we wanted to cover and most students spoke about plastics. To link the project to the college we decided to look into how plastics were used in the canteens.
“Through the research and student surveys we discovered that the college was already doing great things around recycling. Cutlery is now bamboo based, packaging is reported to be all compostable and there are recycling bins in all areas for people to use.”
The trio discovered that the next important step was to ensure the positive message that the college is working well with reducing plastics is well embedded with the student body.
They have designed an informative poster which includes facts about plastic use in the UK, including:

The poster also includes points highlighting how people can swap plastics for other things, including:

The ‘My World, My Home’ project has seen A Level students getting involved in a number of ways of making positive changes to the environment and it is run in conjunction with Friends of the Earth and the SOS – Students Organising For Sustainability charity. A previous project included planting hawthorn saplings on the college’s Derby Road fields, to see more native hedgerows thriving in the community.
The project provides students an endorsed certificate for participating in the project and will earn them 8 UCAS points each ready for when they apply to university.
The ‘My World My Home’ East Midlands campaign coach, Hannah Evans, said: “The group has worked really well via Microsoft Teams and this is the first time everyone has actually met in person. Their work in putting together an environmental campaign at a distance.
“I’m confident they’ll be really successful in their efforts in getting environmental tutorials delivered to students. The students have recognised that this will have the biggest impact in engaging fellow students with our current environmental crisis and how they can go on to take action on environmental issues.”