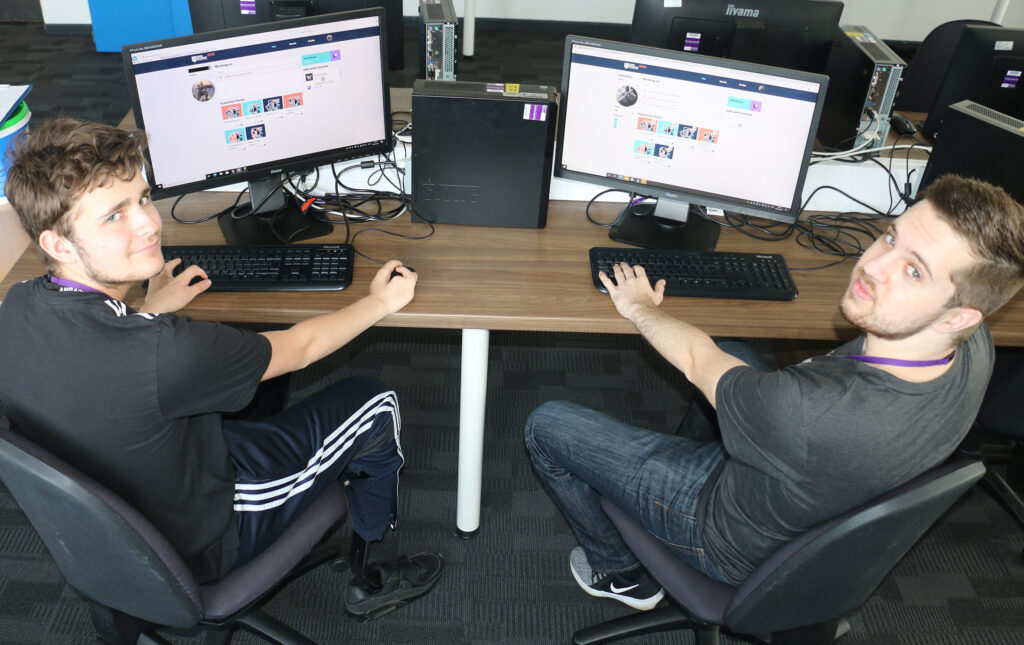 Avid video gamers at West Nottinghamshire College are harnessing their gaming skills to prepare for the jobs market – hoping to turn their hobby into dream careers. 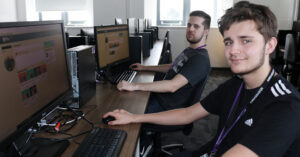 Computer science students took part in a ‘boot camp’ run by Game Academy – a pioneering tech venture which provides players of popular computer games with insight into their talent and get them thinking about the job roles they may be best suited to.
An estimated 34m people in the UK play video games and, in doing so, develop skills that are essential to the future economy – yet many gamers don’t know the talent they’re sitting on. First-person shooter (FPS) games like Call of Duty demand and develop visual memory, spatial cognition and complex problem solving, while strategy games like Civilization VI require logical reasoning, problem sensitivity and organisational skills.
A cutting-edge careers programme, Game Academy believes that gamers are an answer to the global digital skills shortages faced by an increasing number of employers. Due to automation, up to half of today’s jobs will need re-skilling. And by 2030, it is estimated that 230m new jobs will be created around the world – and two-thirds of these roles will be digital.
The online platform encourages gamers to participate in a series of campaigns and quests designed to sharpen their skills while playing the games they love.
Players share their gaming profile and Game Academy provides free reports on their gaming attributes and employability. This shows their value to the labour market – highlighting their likely personality traits and skills that might benefit an employer. It signposts people ‘graduating’ from its courses to employment and new educational opportunities.
The venture approached the college to trial the service because of its commitment to innovation and to preparing young people for employment in the 21st century digital economy.
A class of 25 learners on the Level 3 Extended Diploma in IT (Application Data Practitioner) and Level 3 Foundation Diploma in IT (Application Developer) courses have just completed a two-week trial programme of learning, playing their favourite games, working with one another online and attending special streams on the Steam platform.
The college is now considering using the Game Academy platform in the induction of new students and to guide the learning process.
Computer science students Laurentiu Nitu and Ben Allen, both 18, were among those who took part in the Game Academy ‘boot camp’.
Laurentiu said: “It was very useful in highlighting the job roles that I am most suited to. I mostly play FPS games like Call of Duty and racing games like Need for Speed and Forza Horizon. These require good hand-to-eye co-ordination, which helps with working more efficiently when it comes to pin-point accuracy.
“Game Academy showed my main areas of strength as being entrepreneurship and leadership, which I hadn’t realised about myself, along with creativity and team-work.
“I aim to work in the IT industry and have applied to study cyber security at university, so the website helped me understand how these skills are going to help me in this area of work.
“You need team-work to win certain video games so if you aspire to work in computer programming or cyber-security you will have to work with people in order to succeed.”
Classmate Ben said: “Using Game Academy and playing Call of Duty revealed a trait I didn’t know I had, which is leadership. It also allowed me to focus on team-working.
“My aspiration is to go to university and study a generalised computer science pathway and maybe in the future look at working in website development. This requires team-work because usually there isn’t just a single person behind a company’s website – it’s done by a team of people who contribute to all the elements underneath it.
“At the end of the programme you receive certification to say you have completed the Game Academy, which will stand out on your CV. Because your user profile is unique, it shows your individual skillsets. By playing the games, you understand what your strengths are so you can demonstrate these to employers.
“I think it’s good that employers are starting to realise that people who play video games on a regular basis are actually building on their employability skills.”
Computing tutor Wayne Johnson said: “This was a great opportunity for learners to be involved in a ground-breaking programme to explore their personal motivations and attributes within an innovative environment, with the unique appeal of using their computer gaming skills to explore potential careers.
“Students have fully enjoyed the experience of being part of the Game Academy community.”
Game Academy chief executive Irina Agafonova said: “We’re so pleased to have worked with students at West Nottinghamshire College on this project. Everyone found it fun. Many discovered new things about themselves and thought about the value of their in-game skills, out-of-game.”
David Barrie, co-founder of Game Academy, said: “Gamers are the talent force of the future. Their digital skills, remote work, problem-solving and other skills that they apply day-in, day-out are now defined as ‘skills of the future’ – and the pandemic has dramatically expanded demand for these talents.”
Powered by cutting-edge technology and scientific research, Game Academy was launched in 2019 by a group of gamers with careers in data science, teaching and HR. The team has looked at the game traits and behaviours of more than 50,000 gamers so far, and the top 100 games on Steam. Its growing data set and research connects traits found in game play with skills and careers, linking games like XCom and Football Manager with management, EVE Online with IT and Stardew Valley with creativity.