The News Journal reports that:

Performing arts teacher Amy Beilby (26), of Mansfield, has been nominated as a Miss England finalist after entering the contest virtually.

Amy is now set to represent her home town after being presented with her tiara and sash by the reigning Miss England, NHS doctor Bhasha Mukherjee, who works at the Royal Derby Hospital.

Amy and Bhasha wore white gowns from To The Nines Boutique for the special crowning, held as a socially-distanced photoshoot with three other finalists.

Amy initially entered the contest in March before the pandemic began and qualified for the virtual semi-final, which was held as a Livestream event at the end of July.

Contestants were invited to submit three videos of themselves — an introduction, a, catwalk and an optional talent video.

Also contestants were encouraged to compete in a charity fundraising contest for Beauty With A Purpose and create an ethical fashion outfit, with the theme #wearitgreen from recycled materials. 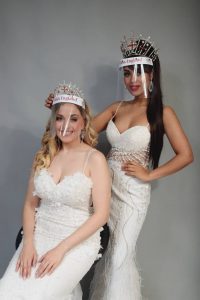 Three judges appeared via Zoom from across England, alongside a socially-distanced judging panel of three Miss England winners, who then selected the finalists.
Amy is sponsored by Richard Murrill and received gifts, including hair products from Indola UK and skincare from Cetuem.

Amy said: “It’s an honour to represent Mansfield at the Miss England final. It is my dream to represent my country and be a positive role model to more young girls across the country as well as support causes I’m passionate about, so I am working hard in preparation.

“I’m currently organising my ‘3 Bs project’ within schools to educate young people to become healthier, physically and mentally; encourage kindness to themselves, others and the environment; and to also encourage diversity, individuality and self-confidence. I want to say a huge thank you to the Miss England team for this fantastic opportunity.”

Miss England director Angie Beasley added: “Amy is clearly a very talented lady after showing the judges her singing and creative skills in the ethical fashion round. We are proud to have Amy in the final.”

The contest constantly promotes its ethos, ‘More than just a pretty face.’ Its charity Beauty With A Purpose helps disadvantaged youngsters across the world.
The winner of Miss England is set to represent the country in the 70th Miss World final in autumn 2021.