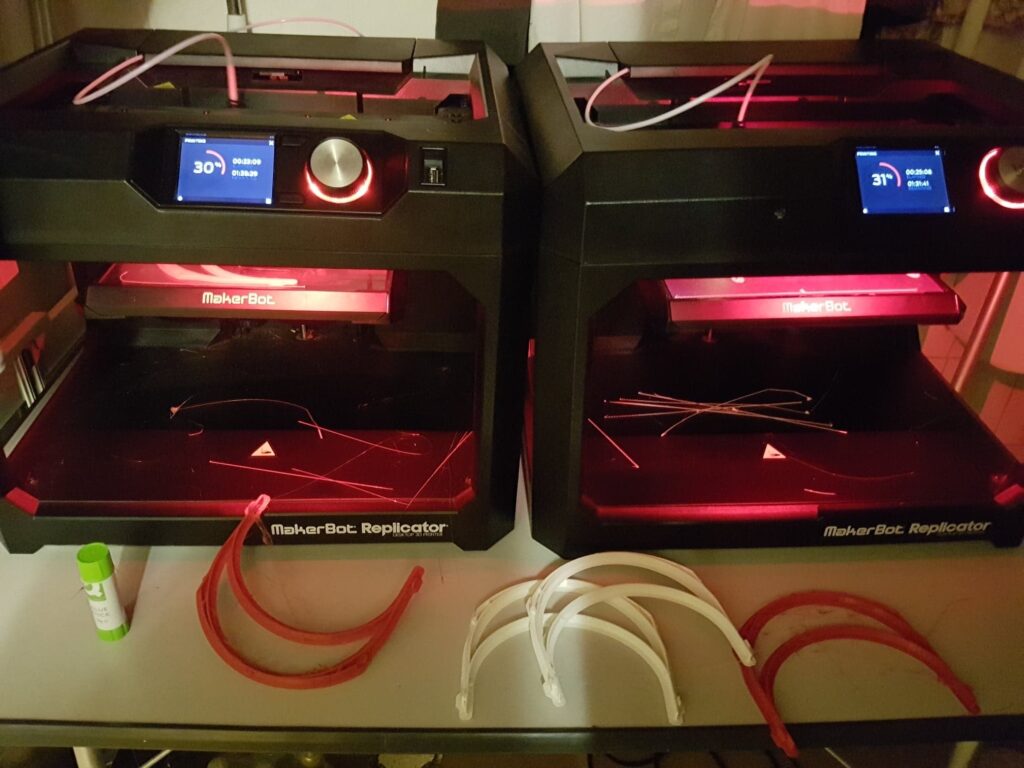 Innovation in 3D printing and concern for healthcare workers on the front line is behind a production line of vital equipment, inspired by West Nottinghamshire College.
A team of eleven creatives have joined forces to provide front line staff with additional PPE (Personal Protective Equipment) in the shape of facial protective visors to help prevent the spread of Coronavirus – and orders are coming in fast.
The project began with the college’s head of digital, business and professional studies, Trudi Dean, alongside 19-year-old digital apprentice student Stuart Harper, who rallied together to form a team of fellow 3D printer enthusiasts, with the aim of helping those on the front line.
After putting a call out on the Mansfield, Nottinghamshire Coronavirus (Covid-19) Mutual Aid Group asking for help from those with access to 3D printer technology, Trudi was overwhelmed with offers of help to produce face visors which are now being rolled out to care homes, funeral directors and staff at Sherwood Forest hospitals NHS Foundation Trust.
Trudi worked with designers in Portland, Oregon, USA to prototype a head band, from which the visor is attached. This was then printed by one of the college’s 3D printers, which students use regularly as part of their computer science course. After a successful attempt, and the purchase of another 3D printer the bands continued to be made and they became inundated with orders, with nursing staff wanting to order them as well as care homes and other local individuals.
Trudi put the call out to the local community to join in with the creation and they were delighted with the response. It saw eight individuals, who didn’t know one another before the project, all with access to printers and a desire to help, join together to start the production line of printing the bands in earnest.
The team consist of Trudi Dean, Neil Randle, Ian Taylor, Tim Fisher and Jimmy Sutton, all from Mansfield; Daniel Clover from Mansfield Woodhouse, Andrew Cullington from Shirebrook, Karl Sparham from Church Warsop, Paul Mosley from Warsop Vale, Jack Lowater from Kirkby-in-Ashfield and Stuart Harper, the digital apprentice from the college, who lives in Clipstone.

Trudi said: “After a call from our director of finance, Jon Fearon, I was inspired to get involved because my nephew Jordan Rowley is a paramedic for West Midlands Ambulance Service. He spoke of concerns for people working with patients who have the disease and lots of my friends are nurses too.
“Knowing the college had access to a 3D printer made me determined to kick-start this project and we’ve been honoured to have others join us in this mission.
“The college has supported us in buying another printer and even if we can only help our local community, then this is so worthwhile. We’ve got a task ahead of us but we’re ready for it!”
Each band takes two to three hours to make. Once printed, an A4-size acetate and elastic straps  are attached to fix to the head.
The team is printing 24-hours-a-day and to date, they have orders for more than 1,000 visors which they are making and delivering for free.

Digital apprentice Stuart Harper, from Clipstone, said: “This is such a great project to be involved in and it feels good to be helping our brave health workers. The orders are starting to grow now. We’ve had requests for over a thousand visors and we’ve made over 500 so far.
“My printer is running 24-hours a day and I’ve even got my mum and dad (Donna and Kevin Harper) helping me to put the visors together after I’ve printed and filed them.
Stuart is even finding the time to engage in his classwork lessons via Microsoft Teams when he’s not on the production line, which he says “is a completely different way of getting lessons but it’s actually working really effectively.”

There is now a ‘Go Fund Me’ page where people can donate to help the team keep replenishing supplies of PLA, elastic and acetate sheets. This can be found at https://www.gofundme.com/f/3d-printing-during-covid-19-outbreak

For anyone who can donate A4-sized acetate sheets or 10-15mm elastic they should email Trudi at trudi.dean@wnc.ac.uk