Tour of Britain returns to Mansfield 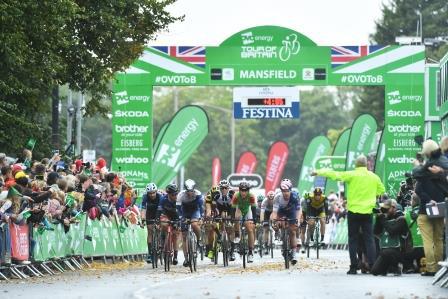 People are being urged to get into gear as Mansfield district prepares to welcome the Tour of Britain for the third time.

The globally televised cycle race, featuring top flight athletes, is back in Mansfield on Thursday 8 September and is expected to be watched by thousands of people lining the route in the area.

Local riders Ross Lamb, from Mansfield, and Ollie Peckover, from Ruddington, who both cycle for the Ribble Weldtite Pro Cycle team are expected to be among the 114 competitors among the19 teams taking part.

After successfully hosting a stage start of the Tour of Britain in 2017 and a stage finish in 2018, Mansfield District Council will again host the festival finish for Stage Five of the race in Chesterfield Road Park.

Last time the Nottingham/Mansfield leg of the race was watched by 35,000 people and is estimated to have brought in more than £360,000 of spending in the district. For the whole of Notts, the race was calculated to have boosted the local economy by £2m.

This time, Stage Five of the race passes through 118 miles (191km) of Nottinghamshire, including 8.8 miles (14km) through Warsop, Mansfield Woodhouse, Forest Town and other neighbourhoods close to Mansfield town centre.

The Tour of Britain ‘village’ and festival will open at 11am in Chesterfield Road Park with big screen coverage of the race, have-a-go BMX track, cycling themed family entertainment for the crowds and a nail biting finish-line dash for local schools to take part in. There will be food and drinks available and plenty of stalls to browse.

Stage Five will be setting off from West Bridgford and enter Mansfield district from the B6034 from Edwinstowe with the first riders expected to cross the finish line outside the Civic Centre around 3.15pm. The full route can be seen on our Tour of Britain hub website (opens in new window)

Local people and business are being encouraged to decorate their properties and gardens in the run-up to the race as well as cheer the cyclists on as they pass by.

To learn more about the event and planned road closures, further information can be found here.

← Back to Business Community News