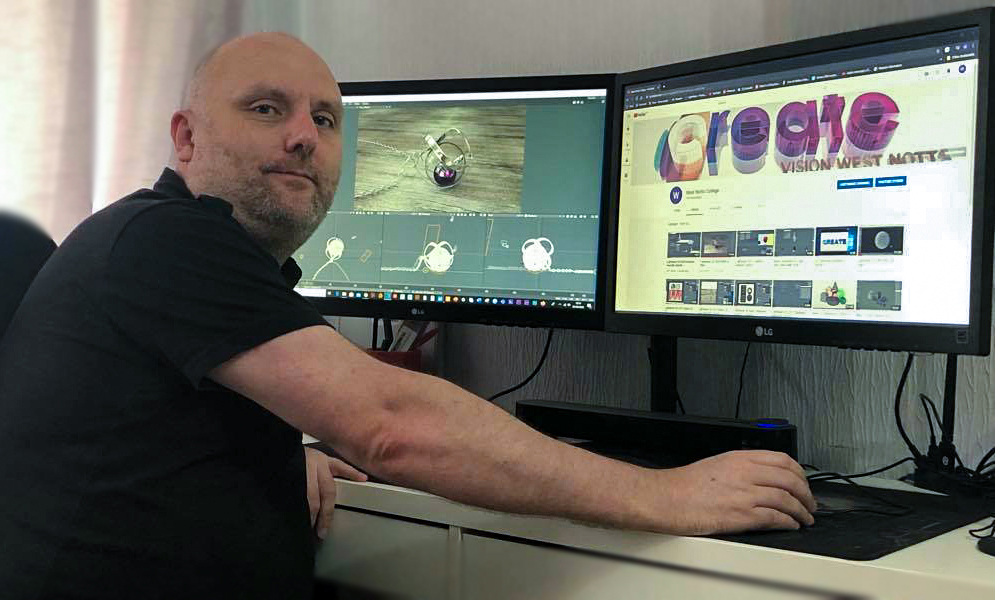 A film school which promotes excellence in digital film-making has ranked West Nottinghamshire College’s online training videos the number one channel for learning LightWave 3D.
The Hawaii Film School recently published the results on You Tube and positioned creative media tutor Tony Hall’s training as the best out of 12, beating trainers from all over the world – even topping LightWave company’s own learning channel, which came in at number three!
LightWave 3D is a computer graphics program developed by a company called NewTek. It has been used in many things such as films, television, motion graphics, digital matte painting, visual effects, video game development, product design, music videos, and advertising.
Tony teaches LightWave 3d on the creative digital media courses at the college’s Derby Road campus. West Notts is one of NewTek Europe’s authorised LightWave 3D Training Centres and all training is delivered in a state-of-the-art Apple Mac studio with the latest version of LightWave 3D.
Hawaii Film School’s countdown of excellence in LightWave 3D videos focused on the range of providers’ content and the depth that the training goes into, how fresh it is, as well as how well the videos are presented and the passion the trainer has on the subject. It can be viewed here https://www.youtube.com/watch?v=ZS2OVBnngR8&t=17s
In the video, the narrator remarked on Tony’s teaching being informal and delivered in a light-hearted manner and credited him for showing a great range of knowledge, techniques, ideas and tools. It went on to say: “If there was only one channel you could go to for LightWave learning, this is the one.”
Tony’s online lessons cover topics such as 3D modelling, lighting, animation and UV wrapping and can be seen here at https://www.youtube.com/user/tonyhall007

Tony said: “It was a bit of a surprise as originally I keep my video tutorials unlisted, only giving them to my students, but over the last year I’ve been releasing them to the public, which has gone down really well.  There are a lot of other LightWave related channels out there so it was an honour to be nominated as number one.
“The video tutorials I create have helped lots of my students achieve top marks here at West Notts College and many go on to gain great jobs in the creative media industry.”

Tony has organised a number of creative events before where creative media students and members of the public have learned more about the advancements and functions of LightWave 3D.
The 3D content and character technology lead at LightWave 3D, Lino Grandi, hosted the session in 2015. The seminar featured specialists from the creative digital industry and sessions were available for guests to learn more about LightWave in gaming, the art of lighting in the programme and how to use LightWave in product design.

More about LightWave 3D
LightWave 3D® is well-established as one of the leading 3D systems on the market and is designed for independent artists who desire control of their vision from start to finish. With the ability to model, animate and render stunningly realistic imagery and animation, LightWave allows digital artists to create new worlds, build a brand and shatter expectations.