Will’s building his future with confidence 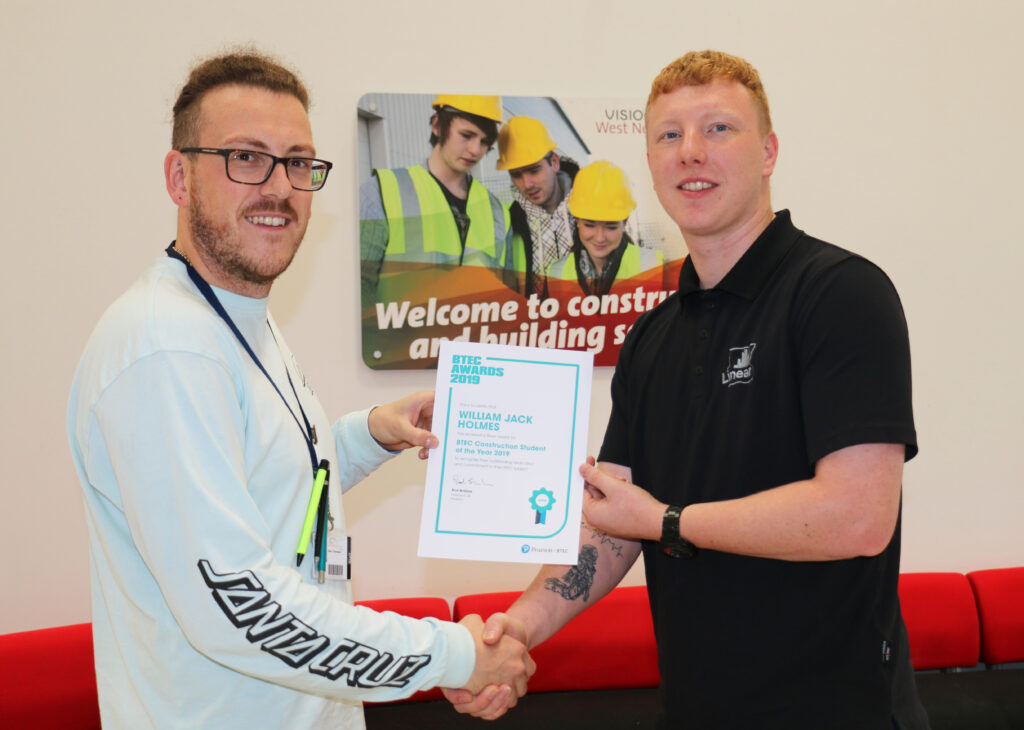 In less than two weeks, eighteen-year-old Will Holmes from Kirkby-in-Ashfield will be collecting his BTEC qualification from West Nottinghamshire College’s construction centre, but he’s been there this week to be presented with something else.

Will discovered earlier this year that he had made it through to the finals in the Pearson 2019 BTEC Awards. He was nominated by his tutor Adam Thompson for his determination and positive work ethics throughout his studies on the BTEC Level 3 Extended Diploma in Construction and the Built Environment.

Adam wanted Will to be recognised for his passion and determination to succeed, his mature attitude and how he proactively went the extra step to help others in his class, while battling mental health issues.

Will was selected to win the Silver Award, which was introduced for the first time this year by BTEC, to recognise and encourage nominees who made it through to the finals by demonstrating their outstanding achievements and commitments.

Silver award winners like Will are on track to achieve excellent grades, display a clear passion for their subject and have examples of going ‘above and beyond’ their studies.

Adam said: “Will struggled with his transition through education and this had a big impact on his mental wellbeing and ability to achieve his full potential. However, he became more confident in his own self-beliefs which saw him become a key participant to group discussions and his progress has been both consistent and impressive.

“He is also a caring individual who always wanted to help others in class, built on his on trepidations with mental health, but he became the student to shine out despite his own personal struggles.”

Will, who now works a trainee estimator at Nottingham-based Linear Developments, said: “I’ve really enjoyed the course and it’s taught me a lot about the management side of construction which is what I’m interested in.

“Having this focus at college and now at work really helps me to channel my thoughts effectively. I’ve struggled with depression and dark thoughts, but being prescribed medication has helped. Coming to college has enabled me to mature over these two years, not just in my studies, but with everything in my life.

“I’ve taken a step back and thought about my worries and overcome them. With Adam’s way of teaching and all of his advice on how to focus and achieve it’s been great.”

Will is now busy working his way to become contracts manager and would like to study quantity surveying and commercial management next year at Nottingham Trent University.